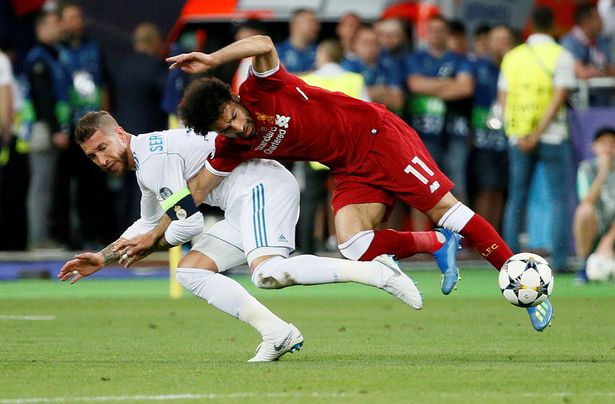 Giorgio Chiellini believes Sergio Ramos‘ tackle on Mohamed Salah that dislocated his shoulder in the 2018 Champions League final was deliberate.

Nearly two years on, people are still talking about Ramos’ tackle on Salah that effectively ended his participation in the game.

Fellow defender, Giorgio Chiellini, has now offered his insights into the tackle in his recently released autobiography.

“Ramos has always said it was unintentional,” Chellini said.

“But he was aware that falling in the way that he did, without loosening his grip on that hold, nine times out of ten you can break your opponent’s arm.

“He has two characteristics that almost no one else has.

“He knows how to be decisive in big games, with interventions that go beyond any logic, that even cause injuries with almost devilish wit.

“The one on Salah in the 2018 Champions League final was a masterstroke.”

He then went on to make strong claims regarding the defender’s invaluable contribution to Real Madrid’s defence.

“You could say he’s impulsive and not very tactically aware, that he is responsible for conceding eight or ten goals a season — and if I’m pulled up for two or three I’d be slaughtered,” he continued.

“Without him, Madrid turn into a team without a defence.

“Without him, Varane, Marcelo and Carvajal look like kids playing for the reserve team,” he added.

Many people believe the tackle played a huge role in the outcome of the game, as the La Liga giants went on to defeat Liverpool by 3 goals to 1.

Ramos is known to be one of the toughest and roughest players in football. That reputation has seen him red carded a record number of times in the Spanish topflight.