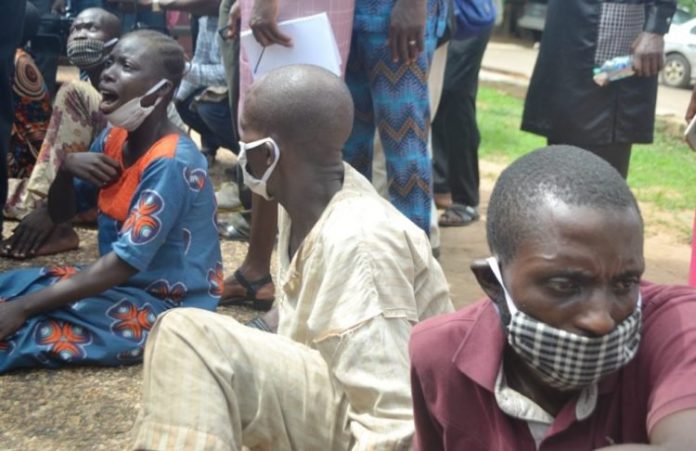 Some suspected persons have been arrested by officers of the Nigerian Police Force (NPF), Oyo state command for involving in the recent kidnapping of the twins of popular Oyo Islamic scholar, Sheikh Taofeek Akuwgbagold.

WITHIN NIGERIA learnt that the suspected kidnappers were paraded by the commissioner of police in Oyo state, Shina Olukolu at the police headquarters situated at the Eleyele area of the state.

It was further learnt that part of N4 million ransom which the kidnappers requested from the troubled cleric to free his children has also been recovered.

Vehicles and weapons which aided the suspects in their operation were also paraded before journalists in the state.

According to report, the only female member of the notorious gang identified as Modinat, was in charge of taking care of the children during their time in captivity.

”I wish to inform you that in the sensational case of the kidnapping of the 2-year old twins of Alhaji Taofeek Azeez “Akewugbagold” on the 25″ April, 2020. All the suspects have been arrested with substantial parts of the ransom collected, the gun used for the operation, the two operational vehicles, and one motorcycle were also recovered from them,”Oyo CP Olukolu was quoted to have said.

This is coming days after twins of popular Oyo Islamic cleric, Alhaji Taofeek Akewugbagold were released by their abductors.