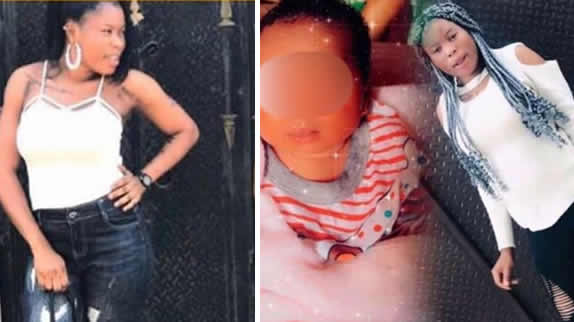 A man identified as Toheeb Badmus, popularly known as TOMORI, took to his heels after stabbing his wife, Tosin, several times at Jankara-ijaiye, in Alagbado area of Lagos State on Tuesday 19th of May, because some men gave her a monetary gift for welcoming a new child.

Narrating the incident, the sister of the victim said; “On the 16th of May, 2020, she came home at night and informed her husband that two of her friends (males) gave her new baby some money just because they didn’t attend the naming ceremony.

“After telling her husband about the money given to her, Toheeb accused her of collecting money from ritualists which the wife denied, explaining how and what brought the money issue up.

“To cut the long story short, they had a mild argument that night and the wife didn’t come home the following day just because of the argument. So on the third day, 19th of May, when she got home, they had an escalated argument that led to a violent fight.

“The husband broke a Ceramic Plate and stabbed her 3 times (on the breast, the stomach and hand). She landed at the hospital and had her body stitched up.

“She was saved with the help of her neighbors contribution because they had to buy some blood to keep her alive. The guy is currently missing.

“He absconded with their first child to somewhere in Ikorodu. He is wanted now and the wife is currently at Ahmadiyah General HOSPITAL.