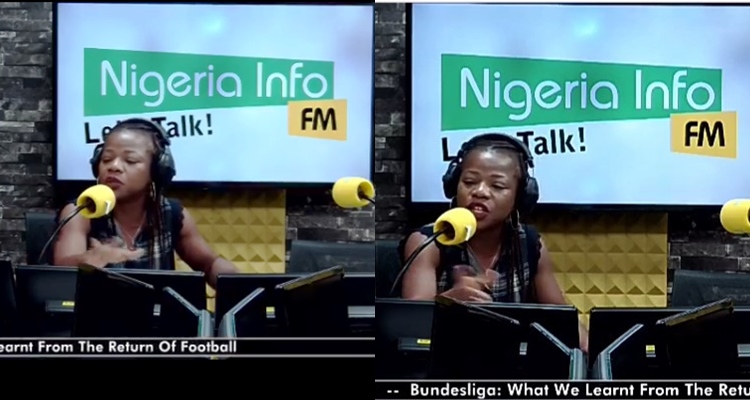 Radio Presenter, Joyce Onyemuwa, who is an OAP with Nigeria Info,Lagos, has slammed a caller on her a radio program, who said on air that women being abused by their partners should emulate Jesus Christ.

The male caller gave his opinion on how he thinks women should handle abusive partners. He advised that the best way to handle it will be the way Christ handled persecution. He added that the women should emulate Christ.

However, Joyce wasn’t having it and she asked him why he can’t advice abusive men to emulate Christ and not hit women.

She said: “I’m saying that, the example Jesus laid, he asked man to specifically emulate him. So, when I even say man, I mean man and woman. But the male in the marriage is not emulating Christ, so you called my radio station to tell me live on air that I, the female, should emulate Christ, but you, the male, you haven’t held yourself accountable at your failure to emulate Chris.

“So you want me to, as a woman, to take a man hitting me in the face.

The male caller responded: “Any man that hits his wife shows an immaturity.”

And Joyce interjected, “I thought you will call the radio station and tell the men to emulate Christ since you’re a Christian, but you’re not doing that. You’re telling the women to stay down and I’m telling the women get up!”

A caller calls to read me his ‘Jesus manual’…. but for women