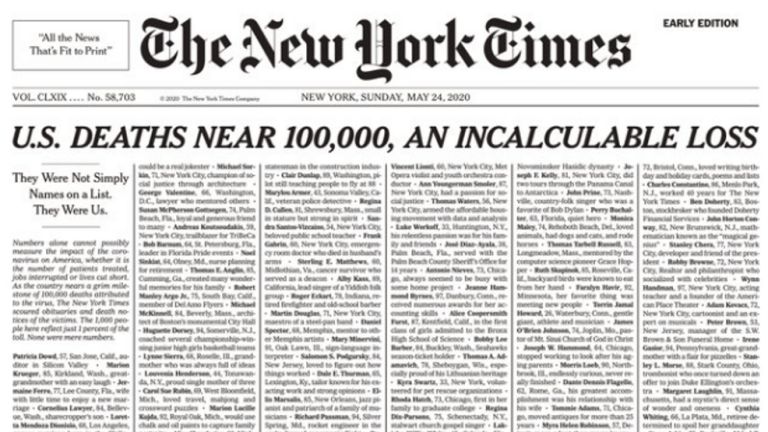 The New York Times has filled the front page of its Sunday edition with the names of those who have died from the novel COVID-19.

All of the usual articles, photographs and graphics were replaced by the list of names and excerpts from their obituaries to memorialise the dead as the U.S. approaches the “grim milestone” of 100,000 coronavirus fatalities, the news outlet wrote.

The assistant editor of the paper’s graphics desk Simone Landon said she and her colleagues realised that “both among ourselves and perhaps in the general public, there’s a little bit of fatigue with the data.”

The page was put together by a researcher who combed through online sources for obituaries and death notices and compiled a list of nearly 1,000 names, the newspaper said in an announcement Saturday.

Short passages were lifted to use on the front page and give a sense of the “uniqueness of each life lost,” including “Alan Lund, 81, Washington, conductor with ‘the most amazing ear’” and “Theresa Elloie, 63, New Orleans, renowned for her business making detailed pins and corsages.”

Overall, the U.S. has confirmed about 1.6 million cases, according to researchers at Johns Hopkins University.

The U.S. currently has the world’s highest number of deaths related to the disease.

But Gov. Andrew Cuomo announced signs of progress on Saturday, as the state reported its lowest death toll for weeks.

At 84 deaths, the Friday tally marked the first time since March that the daily toll was down in the double digits.