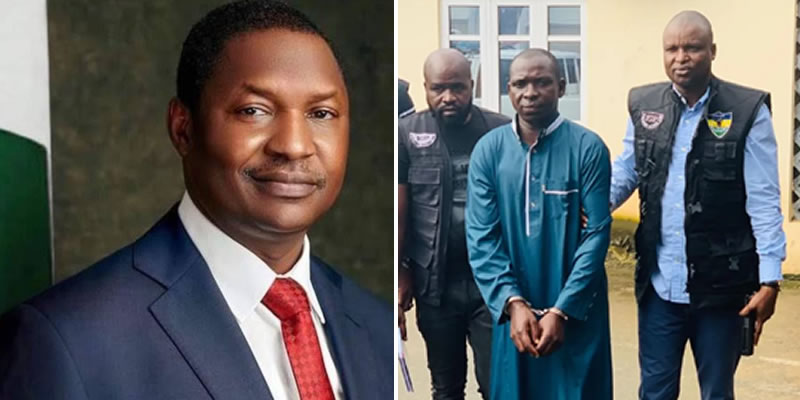 The Minister of Justice and Attorney General of the Federation (AGF), Abubaka r Malami has taken over the prosecution of alleged kidnap kingpin, Alhaji Hamisu Bala, also known as Wadume (33 years) and 19 others charged with terrorism, kidnapping and dealing with prohibited arms.

The case commenced via a 16-count charge filed on January 21 this year, by Simon Lough (an Assistant Commissioner of Police) in the name of the Inspector General of Police (IGP).

A senior lawyer from the Federal Ministry of Justice, Magaji Labaran told a Federal High Court in Abuja on Wednesday that the AGF has taken over the prosecution of the case pursuant to his power under Section 174(2) of the Constitution.

Labaran said the case file was handed to his office the previous day. He noted that only six, out of the 20 defendants, were present in court.

He sought a short adjournment to enable him put things in order and liaise with the arresting and investigating agencies to ensure that all the defendants are brought to court.

Lawyers to the defendants, including Y. D. Dagana, M. I. Tola and Yakubu Philemon did not object to the request for an adjournment.

Philemon, who represented the 16 to 19 defendants, said his clients were absent in court because of the current inter-state lockdown.

Read Also: Kidnap suspect Wadume’s trial stalled as military fails to release defendants
Wadume and others were arrested in Taraba State following last year’s ambush on a team of policemen,who had gone to effect his arrest. About three policemen lost their lives in the incident.

10 soldiers, including a Captain and two policemen are among the19 people charged with Wadume.

They were, in one of the counts, alleged to have, “between February and April 2019 in Takum Taraba State, while acting in concert and armed with guns and other offensive weapons attacked and kidnapped one Usman Garba at his filling station in Takum and demanded and collected a ransom of N106.3miliion before he was released and thereby committed an offence contrary to section 15(1) of Terrorism (prevention) Amendment Act 2013.

They were, in another count, alleged to have “while acting in concert and armed guns and other offensive weapons committed acts of terrorism when you attacked and killed Insp. Mark Ediale, Sgt Usman Danzumi, Sgt Dahiru Musa, Babajide Owolabi and Faruk Bashir in Gidin Waya Ibi LGA, Taraba State, in order to rescue Alh. Hamisu Bala ‘M’ 33yrs (a.k.a Wadume) a notorious kidnapped king pin, who was arrested in connection with several cases of kidnapping and the attacked and kidnapped of one Usman Garba (aka Mayo) where a ransom of N106million was demanded and collected and thereby committed an offence contrary to Section 1(2) of Terrorism (Prevention) Amendment Act 2013.