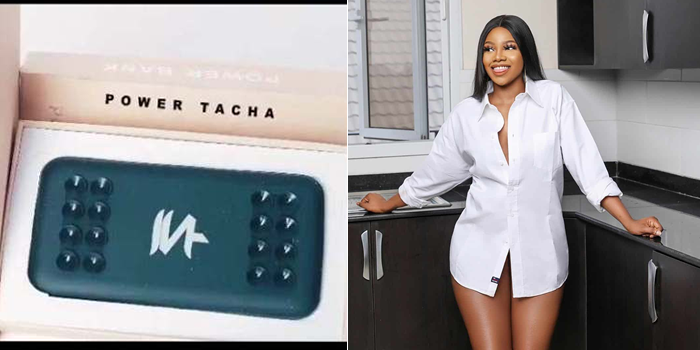 Controversial star, Natacha Akide aka Tacha has shown her appreciation to God after she sold off 500 pieces of ‘PowerTacha’, her power bank brand, in 2 hours.

Tacha took to Twitter to celebrate the feat and also to share her joy with her fans after her Titans bought 500 pieces of the power banks. The power bank costs N15k for one piece.

Tacha had earlier taken to social media to tell Titans of her power bank brand ‘power Tacha and the fans did not waste time in circulating the news and patronising her.

According to her, in less than 2hours, she had already sold 500 pieces which amount to N7.5 million.

Tacha then took to Twitter again to appreciate God and tell her fans.

“God of the disqualified, i give thanks,” she added.

Recall Tacha was disqualified in 2019 Big Brother Naija pepper dem season after she had an altercation with Mercy Eke who later became the winner of the reality TV show.