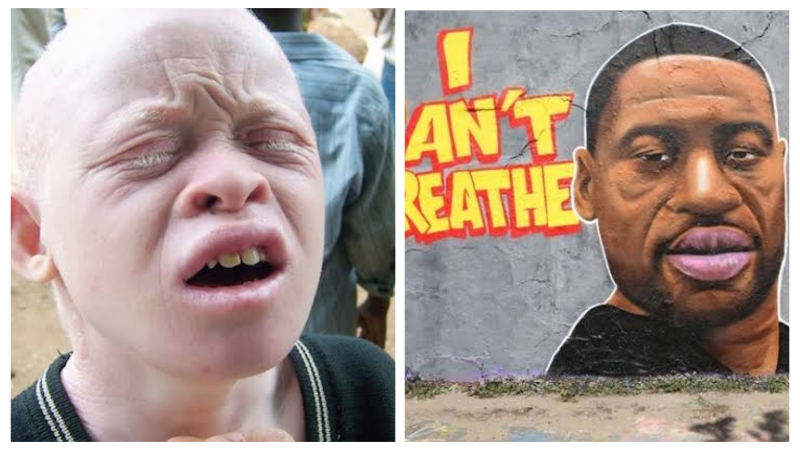 GEORGE FLOYD: Dear Africans, the “albinos” can not breathe too

I have once posited that Coronavirus is not only a deadly disease but a whistleblower. Many who argued with me have finally conceded when recent events made my position clearer.

The virus has exposed our intolerance, indecency and evils we perpetuate on daily basis. We now know better the racists, the rapists, the intimidators, the looters, the power mongers, people who survive through despotic acts especially how difficult and clueless leadership can be at times.

Two weeks ago, the entire social media space was outwashed with the death of a Black-American, George Floyd. Truly, the world has recorded many unjust deaths in this pandemic besides the deadly virus but what made the demise of George Floyd popular was how he was murdered by the same men who were paid by the government to protect and secure him.

George Floyd, a 46-year-old black man died in Minneapolis Minnesota after white police officer, Derek Chauvin knelt on his neck for almost nine minutes while Floyd was handcuffed and lying face down on the street on May, 25, 2020. He was filmed saying “I CAN NOT BREATHE”.

The world lost George Floyd two weeks ago but the agitations for justice and reforms persist. In the same land where forefathers of the blacks suffered discrimination that seemed unending and there was no negative reaction, the death of George Floyd brought a massive change and people across the states embarked on protest to demand for justice in extension to some countries in Africa. As the people mourn George Floyd who was murdered by white police in United States, two rape-murder incidents happened in Nigeria.

A 100-level female student of the University of Benin was raped and murdered inside a church and a fresh student of a Federal College of Animal Health and Production Technology, Moor Plantation was allegedly raped and murdered in cold blood in Ibadan. I also learnt that another post graduate student died of physical attack after it was firstly declared as rape. To say that the evil doers are winning the battles is never an understatement. The world has been chained by the wicked ones.

I give great kudos to people who have shown great solidarity to George Floyd and victims of rape. They have spoken loud and clear which probably have shaken the foundations of the evil ones that RAPE is a crime and the unjust killing of George Floyd should not be encouraged in any sane society. A citizen of any country should not be killed or live in distress or fear because of the color of thy skin, language or intonations that comes from thy mouth. The world truly needs reforms and education. While we protest against the unjust killing of George Floyd, we Africans must always remember that “the albinos” can not breathe too.

GEORGE FLOYD was murdered in cold; as painful as his final exit was, there are millions of “albinos” who have suffered same fate through harassments, abuse, discrimination and segretation. Albinos who live in depression and the walking corpses amongst them who are frustrated on daily basis by our actions and inactions. As much as there are developments with the way they are treated, some black people still see them as a group of ‘minorities’ who have no buisness or little contributions to way of life. There was a time black people see albinos as ‘deities’ and till date, some black people refuse to freely associate with them. Only rich and connected albinos live freely while the poor ones live in disgust and regrets owing to drums of segregation.

The tales of discrimination at workplaces, schools, events and even religious places are as demeaning as the unjust killing of George Floyd. Albinos who were rejected by families of people they love and intend to marry, those who lose their jobs and at a time become laughing stocks in their communities resulting into suicide attempt or something worse would never be same again.

If you displayed placards against unjust killing of George Floyd and you depise albinos or you had rejected a job seeker who’s eminently qualified because of the color of his or her skin or you normally mock albinos as a result of the color of their skin or eye defect, you are as guilty as the white cop who murdered the black man.

They have arrested the white cop and we have seen the worst he could do and we await the end of his trial. As we protest against the killings, I also think we should be afraid and place premium attention on people who mock, segregate and treat albinos unjustly. We may see worse from their ends. Dear Africans, as we show love to George Floyd, we must not also allow the “Albinos” to live rightly.