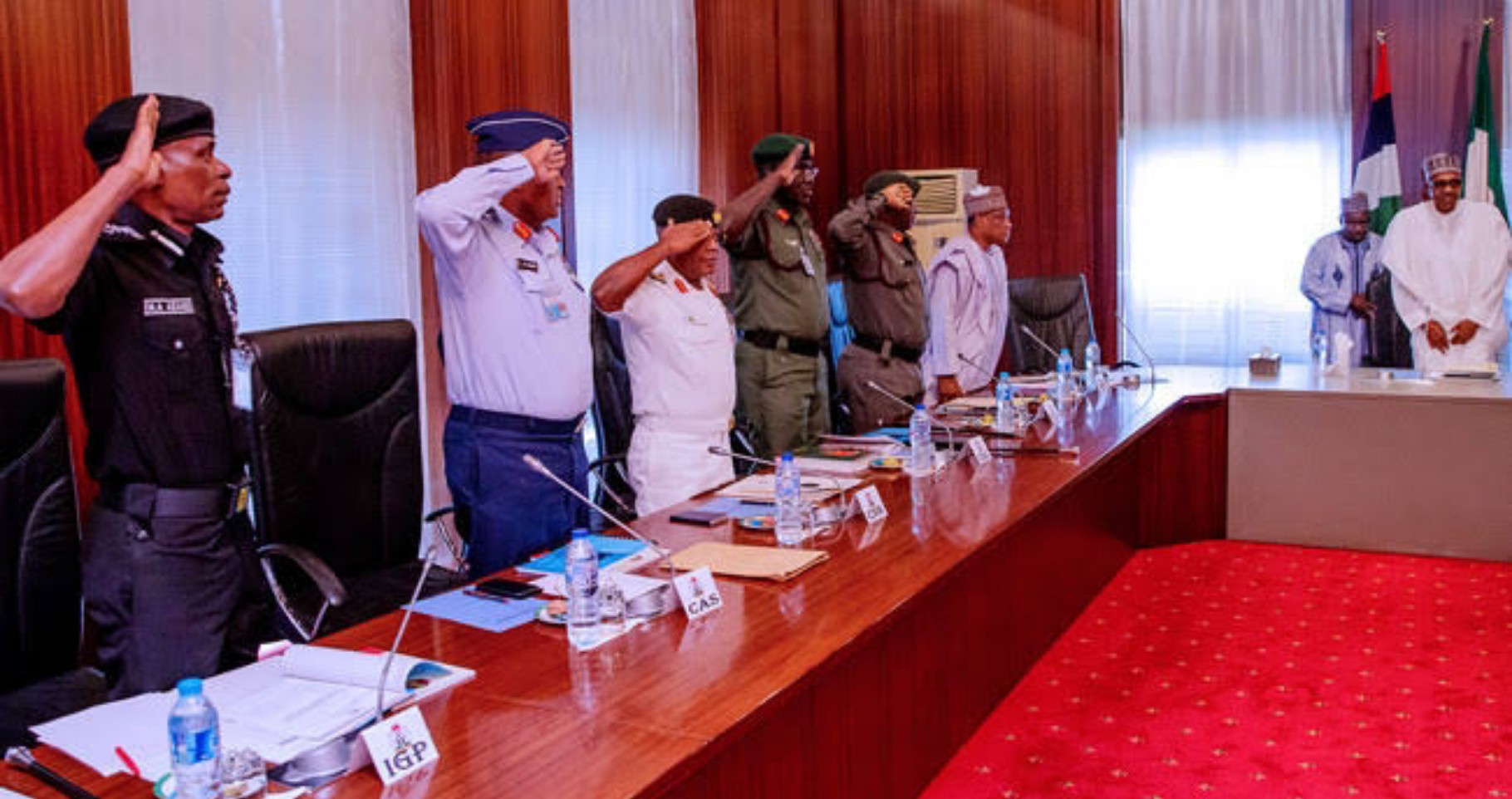 Security: How Monguno Is Dragging The Service Chiefs Behind

One thing you cannot take away from the National Security Adviser (NSA), Major General Mohammed Babagana Monguno (rtd), is the fact that he is not totally unaware of the challenges hampering the security of the nation.

The retired Major General and old boy of Kings College, Lagos, who is experienced in military intelligence though an Engineer by training, most times is able to identify security challenges in the nation.

That was exactly what Monguno did when he led a delegation to commiserate with Governor Aminu Waziri Tambuwal of Sokoto State over the recent bandits attack in the state.

He told the Sokoto State governor while on the visit, that fighting security is not dependent on individual attempts but is dependent on the collective effort of all stakeholders.

To press home the point, the NSA on Thursday, while also addressing the media on the security meeting President Muhammadu Buhari held with service chiefs and heads of security agencies also said that the President had among others things, harped on the need for synergy among the armed forces and security agencies.

He said, “Finally, is about the issue of lack of synergy within the security sector. This has to be addressed also and has left us in no doubt that unless we address this issue and form a single front, the convergence of efforts, the confluence of all ideas be they operational or intelligence, must be achieved so that we no longer if at all there was this notion that groups were working in silos or stockpiling, they desist from that with immediate effect. We must have a central platform to coordinate all the efforts, all operations and security.”

The NSA was to further explain to the media in another interaction in Hausa that the sevice chiefs are expected to streamline their efforts through a central authority and not be seen running to the president individually.

But the only problem is that while the NSA does not pretend he does not know what the problems are, he also fails to distinguish between genuine commitment to national interest as opposed to promoting his personal interest. From indications he prefers the latter.

Anybody aware of how the security agencies in Nigeria have worked in the last five years, would not fail to see the contradiction between what the NSA is saying and what he does.

It has become public knowledge that while all the arms of the armed forces as well as security agencies in the country have at various times teamed up to address certain security concerns and challenges, the one aspect that has been consistently missing in the equation is the input from the office of the National Security Adviser.

The armed forces, made up of the army, airforce and navy have in collaboration with the police, the DSS, NSCDC and other agencies worked together or fight criminality, banditry, insurgency and other security threats in the country.

Outfits such as Operations Crocodile Smiles, Sharan Daji, Harbin Kunama, Ayen Akpatuma, Whirl Stroke, Safe Haven and others, which were established along the line, are all joint efforts of the various security agencies which have produced enormous results.

But as these efforts are made, one can hardly single out the input of the NSA.

While the NSA is conspicuously missing from the battlefield, however, his presence looms large on the arena as he engages in turf and media wars. In other words, the NSA is more concerned about increasing the powers of his office than join hands with others to fight insecurity in the country.

The few instances there’s an intervention from the office of the NSA which the public became aware of, hardly had anything to do with the issues of security bedeviling the nation, but borne out of ego and fight for space.

In December, Monguno came out to confront the then Chief of Staff to the President, Mallam Abba Kyari over a lucrative contract for the procurement of defence equipment for the Nigeria Police Force.

Monguno, tackled Kyari, for allegedly overriding a previous directive of the president in a contract to procure equipment for the police from the United Arab Emirates.

In the letter that was addressed to the police affairs minister and police inspector-general, Monguno, described Mr Kyari’s action as “reckless and irresponsible”, warning that it was capable of ridiculing Nigeria as an unserious nation before a reliable international partner.

The NSA said only himself, as the head of multiple national security panels, and the defence minister have constitutional roles to act on security matters.

Not long after that, Monguno, in a letter, accused Abba Kyari of undue and dangerous interference on matters bordering on national security and wrote a warning memo to all service chiefs to desist from taking further directives from Mr Kyari.

He, in the letter said Mr Kyari’s directives to service chiefs were sometimes issued without the knowledge or approval of the president.

He wrote, “Chief of staff to the president is not a presiding head of security, neither is he sworn to an oath of defending the country.

“As such, unprofessional practices such as presiding over meetings with service chiefs and heads of security organisations as well as ambassadors and high commissioners to the exclusion of the NSA and/or supervising ministers are a violation of the Constitution and directly undermine the authority of Mr President.

“Such acts and continuous meddlesomeness by chief of staff have not only ruptured our security and defence efforts, but have slowed down any meaningful gain that Mr President has sought to chieve.”

The letters would not be the first time, Monguno would be seen fighting to expand his areas of influence as NSA.

In 2016, Monguno was locked in a fierce rift with the former director-general of the Department of State Security Service (DSS), Lawal Daura, until the latter was removed from office.

Many are disappointed with the way Monguno is carrying out his job given that he was highly recommended for the position due to his training and experience in intelligence.

But despite having the benefits of learning from the mistakes of his predecessors Monguno seems bent on repeating them.

When former President Goodluck Jonathan sacked General Andrew Azazi as his National Security Adviser, it was partly because Azazi was said to have become more obsessed with the office of the NSA and was apparently doing more to protect himself in office than the job for which he was hired

Hence it was easy for the former President to accuse him of using the same strategies repeatedly at a time the tactics of Boko Haram militants were changing.

No doubt, many see Monguno as not moving away from this path as his reported experience in intelligence has not been brought to bear on the security situation in Nigeria.

He is an NSA that would rather be bothered about the President receiving security information first hand from the service chiefs than knock out a strategy that would hinder the operations of insurgents in the country.

He would rather be bothered about protocol and bureaucratic niceties rather than the drastic and pragmatic essence of winning the fight against insurgency.

This is in spite of the huge allocation to his office for the purpose of securing the nation as the National Assembly increased the spending plans of the office with N25 billion budget largese in addition to the earlier N2 billion to the office for the year 2020.

Another reason why the choice of Monguno seemed apt at the beginning was because he is not only from Borno State but from Monguno, one of the local governments being ravaged by the activities of Boko Haram and ISWAP terrorists.

People expected that with his knowledge of the area, he would take pragmatic steps and go beyond what former President Olusegun Obasanjo had done by travelling to Maiduguri and engaging the terrorists in dialogue. But no such thing had been forthcoming from the NSA who has exhibited only a little or no sign that he is even from the place since he became the NSA.

People expect the NSA who is clearly lagging behind in the security equation and who by default is dragging others behind to forget about fighting turf wars at least for now and bring his experience to the theatres of operation. That is one of the ways Nigeria can win the war against insurgency and terrorism and not be shifting blames as he does always.