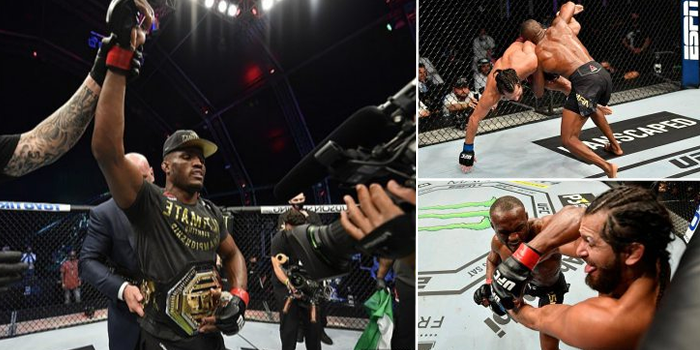 Kamaru Usman, the Nigerian Nightmare has proven once again that he is a tough champion to dethrone in the UFC welterweight class, after he demolished Jorge Masvidal Saturday night.

The Nigerian Nightmare has undisputedly established himself once again as the best welterweight in the world.

He also had five takedowns, while Masvidal did not have any.

After the fight, the undefeated champion Usman said: ‘Gamebred is the biggest, baddest dude out there right now, so i had to switch gears preparing for him on six days notice. All these guys are preparing for one guy and that’s me, at the top of the mountain.

‘I trained for Gilbert, i had a different game plan. Gamebred is tough, he landed some elbows from the bottom and he didn’t quit.

“I knew Jorge is tough, I’ve always said it minus all the trash talking and all the things going on, Jorge is a tough guy and I give him credit for that.

‘I’m just levels better. I have more tools in the toolbox and when I need to I can pull them out and use them.’

He defeated Colby Covington by fifth-round TKO at UFC 245 to solidify himself as champion after taking the belt from Tyron Woodley at UFC 235.