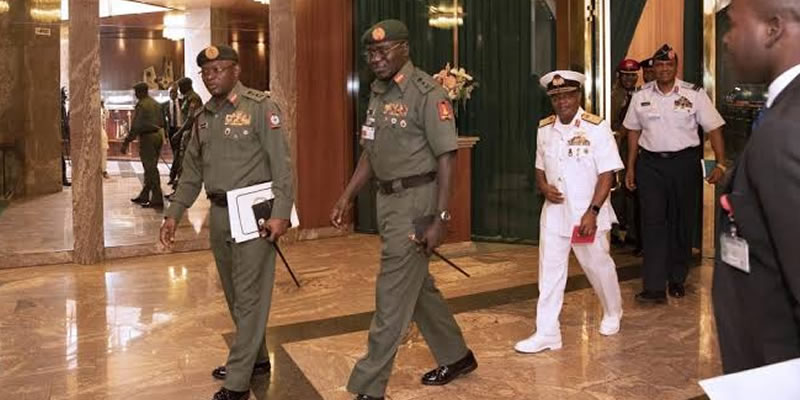 Killings of soldiers: Senate asks Service Chiefs to step down

The Nigerian Senate on Tuesday asked all Service Chiefs in the country to step down to allow for the restructuring security architecture.

This is one of the resolutions adopted after the lawmakers deliberated on a motion on the rising number of casualties among soldiers and other security agencies.

In his presentation, Mr Ndume expressed worry about the rising casualties among the troops.

While he appreciated the sacrifices that the soldiers make for the country, he emphasised the need for better service conditions for them.

Should the trend of incessant attacks on the troops continue, it will affect the nation’s fight against insecurity, he said.

“The senate appreciates the sacrifice of our armed forces in the fight against the insurgency and banditry and protection of territorial integrity and several other security assignments given to them.

“The senate is concerned that if the trend continues, it would have serious implications on the fight against insurgency, banditry.

“It has been alleged that over 200 soldiers voluntarily resigned their engagement or appointment with the Nigerian army,” he said. Senator Betty Apiafi seconded the motion and it was upheld by the Senate President.

Other lawmakers like Istifanus Gyang and the Senate Leader, Abdullahi Yahaya, took turns to condemn the attacks which they described as disturbing.

They also called for urgent attention.

The lawmakers also mandated their committees on Defence, Army, Navy, Police, Airforce, National Security and the ministry of interior to receive briefings from security agencies on the state of affairs in this regard.

They also urged the federal government to intensify the provision of modern equipment to enhance the service of the military.

Tuesday’s call for the exit of service chiefs is not the first from the ninth assembly.

In his remarks, Senate President, Dr Ahmad Ibrahim Lawan expressed concern at the large number of military officers who are leaving the war front.

He said there was the need for government to look into what is happening wrongly in the military.