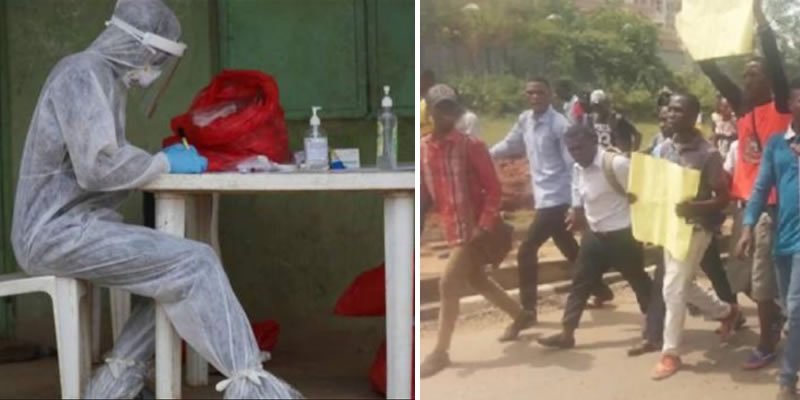 Scores of parents of private secondary school students in Ogun State, on Sunday, staged a protest over the compulsory COVID-19 test slammed on their wards by the state government.

The protesting parents accused the Governor Dapo Abiodun-led administration of demanding the sum of N25,000 for each returning boarding student of private schools to be tested before resumption of classes.

This comes ahead of the return to schools by graduating pupils following months of closure due to the coronavirus pandemic.

The state government had ordered all SS 3 boarding students in the state to take COVID-19 and malaria tests before they will be admitted into their various hostels.

A statement issued by the Special Adviser to the Governor on Primary and Secondary Education, Mrs Ronke Soyombo, said the State Ministry of Health had already made provisions for the students to take the tests, as part of the conditions for the re-opening of schools in Ogun.

The government in the statement also asked the parents to take their wards to designated places for the test between Friday and Monday.

Many of the parents, who took their demonstrations to the streets, faulted the decision of the government to ask them to pay N25,000 on each pupil before they would be allowed to resume.

The dissatisfied parents on Sunday thronged the MTR 250 bed specialist hospital, Oke-Mosan, Abeokuta, the designated place for the pupils in Abeokuta.

It was gathered that attempts by the parents to get their children tested for free failed as they were asked to pay N25,000 for each child.

Newsmen observed that many parents were locked out of the facility.

Some of the parents, who spoke lamented that the payment of N25,000 for COVID-19 test showed the government cared less about its citizens, complaining that the economic reality in the country had made it difficult to pay such an amount of money.

Speaking on behalf of the parents, the Vice-Chairman, Parents Teachers Association of one of the private schools, Dr. Kehinde Sanwo, queried the action of the government.

Sanwo, who was flanked by other aggrieved parents, decried the alleged discrimination against students in private schools.

She said, “The parents here are good citizens of Ogun State and we are taxpayers. And it is so disheartening that we are here at the MTR hospital, the venue for COVID-19 test.

“When we arrived, we were told to pay N25,000. Whereas, some people who arrived earlier paid nothing. So, we don’t know where the decision came from. Some of us have more than two children. Why this segregation?”

Reacting to the protest, the state government insisted that the parents would need to pay the levy and get a certificate to show that their children were COVID-19 negative before they could resume school.

The government in a statement by the Special Adviser to the Governor on Basic and Secondary Education, Mrs Ronke Soyombo, said, “The government will bear the full costs of the COVID-19 Test for all the boarding SS3 students in the state-owned public schools.”