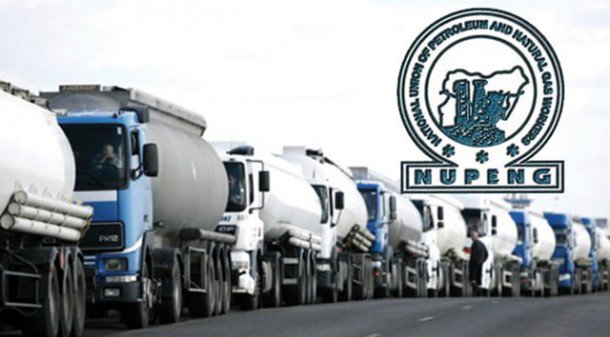 The Nigeria Union of Petroleum and Natural Gas Workers (NUPENG) at the weekend, threatened to go on strike action effective on Monday, over extortion, harassment of its members.

It said the action became imperative following the failure of various authorities in Lagos State to address three major issues that have severely caused pains and harrowing experiences on the Petroleum Tanker Drivers in the State for several months.

The union in a statement jointly signed by Comrade (Prince) Williams Eniredonana Akporeha, NUPENG National President and Comrade Olawale Afolabi, NUPENG General Secretary, a copy which was made available to Nigerian Tribune, said it made several appeals and reports to Lagos State Government and the Presidential Task Force for the decongestion of Apapa on these challenges but all to no avail.

“The entire rank and file members of the Union are deeply pained, frustrated and agonized by the barrage of these challenges being consistently faced by Petroleum Tanker Drivers in Lagos State and are left with no other option but to direct the withdrawal of their services in Lagos State until Lagos State Government and other relevant Stakeholders address these critical challenges.

“We cannot afford to fold our arms while our members are being consistently and continually extorted, intimidated, harassed and victimized by different groups and segments in Lagos,” it said.

It lamented the incessant extortion of money from Petroleum Tanker Drivers by various security agents stressing that this was already taking its toll on their financial state of its members.

“It is really disturbing and as well inexplicable that security agents who are expected to ensure free-flow of traffic and protection of road users now use their uniforms and arms to intimidate, harass and extort money from Petroleum Tanker Drivers.

“This reprehensible conduct is taking serious tolls on the psychological, emotional and financial state of Petroleum Tanker Drivers and their capacity to effectively and efficiently deliver services to the nation.

“This menace must stop and the leadership of these security operatives in Lagos State must go all out to call their men to order with immediate effect. Every one of them should be contented with their salaries and allowances rather than turning hapless Petroleum Tanker Drivers to a money-making machine.

Also, it said the menace of Containerized Trucks at Apapa, Kirikiri and Beach Land axis of Lagos State and collusion of government officials hindering Petroleum Tankers from loading activities at depots and tank farms.

According to the Union, the persistent traffic gridlock and indiscriminate parking of containerized trucks on major Lagos roads and bridges leading to Apapa port, Kirikiri, Beach Land, Satellite Town, Ijegun, are another major setbacks bedevilling the smooth running of the operations of Petroleum Tanker Drivers in Lagos State.

“As at today, MRS depot has been held captive for more than 3 months from discharging products to Petroleum Tanker Drivers despite heavy availability of Petroleum products stockpiled in their tank farm facilities.

“For safety reasons, Petroleum Tanker Drivers cannot continue to struggle with these containerized trucks in these corridors considering the inflammable nature of the products our members carry and we cannot afford to undermine safety standards, procedures and protocols in the course of our services.

“Consequently, as a socially responsible organization, we have made wide consultations with various leadership organs of our Union and with other key stakeholders in the oil and gas industry and therefore resolved to embark on an indefinite strike beginning from 12 am, Monday, August 10, 2020, if there are no decisive and convincing actions from Lagos State Government to address these concerns and challenges,” it stated.