BBNaija Star, Ifuennada fights dirty with a follower who compared her body to a ‘beer can’

BBNaija ex housemate, Ifuennada has been forced to fight dirty on Instagram after a troll compared her body to a ‘beer can’. A particular Instagram user identified as @marktrager5 in his comment compared her size to that of a canned beer. He wrote: “But to be honest, small you use pass can beer oo. Nice dance sha.”

Although he complimented her dance moves, the shade thrown wasn’t lost on Ifu Ennada who wasted no time in checking him in the same tone he used on her. She wrote: “My size or height is not the reason for your failure in life. Nice stupidity sha.” 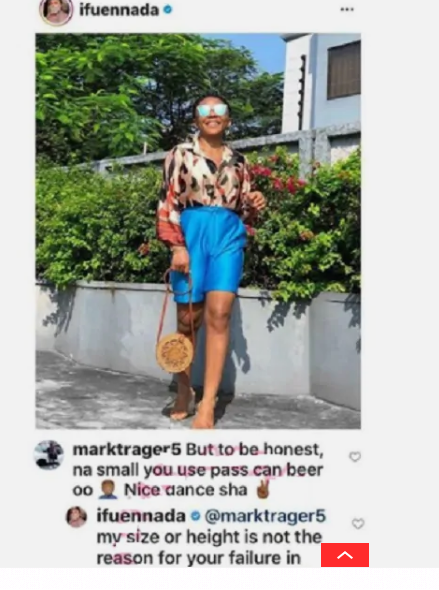 The entrepreneur who is perfect in dealing with trolls on social media disclosed few months ago, her desire to marry three husbands. According to thebusiness woman, marrying three men is something she is craving for at the moment.

“I think I want to marry three husbands…the way it is doing me now. Just thinking out loud sha.”She wrote.