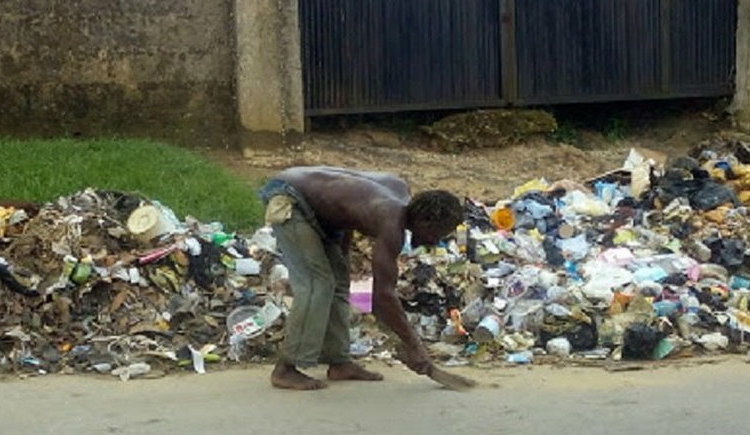 A mentally deranged man whose one arm is amputated, identified as Papa has killed a 39-year-old man identified as Okon Nya Nyong in Uyo, Akwa Ibom State capital. The deceased is an indigene of Odukpani Local Government Area of Cross River State and he was a petty trader in Uyo.

The lunatic man who stays with his father, Mr. Ime David at No. 7, Nwaniba Road, Uyo is known to be notorious for violent behaviour at Oron and Nwaniba road traffic lights in Uyo metropolis.

The neighbour of the deceased, Emem Ime Solomon narrated that the incident happened few minutes after 6:00 am on Friday, August 14, 2020.

She said Late Nyong had gone to fetch water in the morning, only to be ambushed on his return and stabbed with a broken bottle by the suspect.

According to her, “the deceased was stabbed at the back, while carrying his water container. He attempted to escape the attacker as he dashed towards his apartment.

“He, however, collapsed few meters to his house and the suspect closed in on him, stabbing him with reckless abandon.

“As people in the neighborhood came out, Okon Nyong had slumped, having lost a lot of blood.”

The victim was said to have been rushed to a nearby hospital where he gave up the ghost.

It was gathered that the suspect escaped afterwards but was later apprehended in Oron road by some youths who beat him to pulp.

The police later visited the scene and arrested Papa and his father, Ime David.

Also speaking, the deceased siblings, Mr. Edet Okon Nyong and Ikwo Okon Nyong, together with their uncle, Mr. Ekpenyong Ekpenyong, said they arrived Uyo from Cross River State today upon being informed of the incident.

They lamented that the whole family is in pain over the gruesome murder.

When contacted, the Police Public Relations Officer in the State, CSP Frederic N’nudam confirmed the incident saying that the suspect has been arrested and the matter transferred to the Criminal Investigation Department of the State Police Command, Ikot Akpan Abia.

”Yes the police swung into action immediately contacted, the suspect was arrested and the case has been transferred to A division of the command,” Nnudam said.