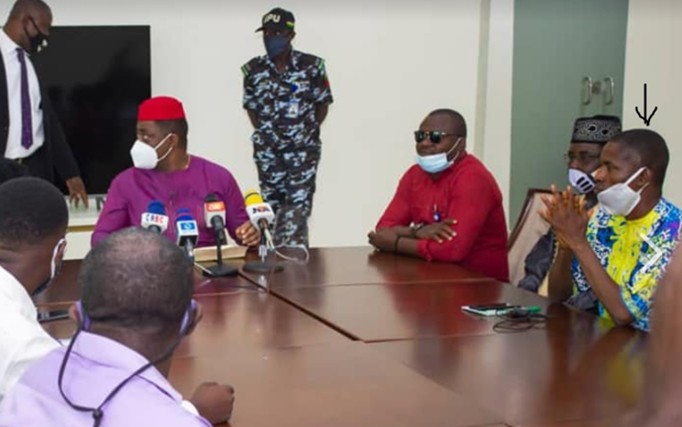 “Fani-Kayode sent aide to threaten me”, Journalist attacked by ex-Minister speaks on ordeal

Eyo Charles, the DailyTrust correspondent who had a bitter encounter with a former Minister of Aviation, Femi Fani-Kayode, in Calabar, Cross River State, at a press conference has narrated his own side of the story.

A video being circulated captured Fani-Kayode abruptly leaving the briefing after a verbal attack on the reporter, Eyo Charles of Daily Trust newspaper, whom he said asked him an “insulting” question.

The incident happened on Thursday at a private hotel where the former minister was briefing reporters on his tour of projects in the South-South state.

The briefing was moderated by Governor Ben Ayade’s spokesperson, Christian Ita, and attended by reporters from Vanguard, Punch, NAN, AIT, and other media houses.

Mr Fani-Kayode, in the video, turned and looked at Governor Ayade’s spokesperson, Mr Ita, who sat close to him. He said he was not going to take any more questions from Mr Charles.

“What type of insulting question is that? Which bankroll? To do what? Who can give me money for anything? Who do you think you are talking to? Bankroll what? Go and report yourself to your publisher.”

The governor’s spokesperson, Mr Ita, stood up and tried to pacify the former minister. “Sorry sir,” Mr Ita said to him. But it appeared he was too angry to listen.

“I could see from your face before you got here, how stupid you are. Don’t ever talk to me like that,” Mr Fani-Kayode kept yelling at the reporter who was still standing and apologising — “I am sorry, sir.”

“Don’t judge me by your own standards,” the former minister kept saying.

“I have been in politics since 1990. I am not one of those politicians that you think will just come…. I was taken, I have been locked up how many times by this government. I have been prosecuted, unlike most of these politicians you follow for brown envelopes!

“Don’t ever judge me by that standard. I spend, I don’t take and I am not a poor man, I have never been and will never be.”

The other reporters appeared stupefied by the incident and did not ask Mr Fani-Kayode any further question. The minister suddenly stood up and left the room.

Meanwhile, the Daily Trust reporter, Mr Charles, said that he was “more disorganised” and had to apologise to Mr Fani-Kayode when he heard other reporters told him right there that he should not have asked the question.

He said he did not expect the former minister to “suddenly jumped” at him.

“The question was sir, you said you have gone round six or seven states to inspect projects undertaken by those governors, and now you are here in Cross River state, rounding off your one-week visit to Governor Ayade. Who is bankrolling you?” Mr Charles said.

Mr Charles said after the incident a “security aide” to the former minister walked up to him, further threatened him and began interrogating him. He said he had to hurriedly leave the hotel premises.

The former minister, the reporter said, later called his editor in Daily Trust and demanded his sack.

The reporter said he regretted apologising to Mr Fani-Kayode over the incident.