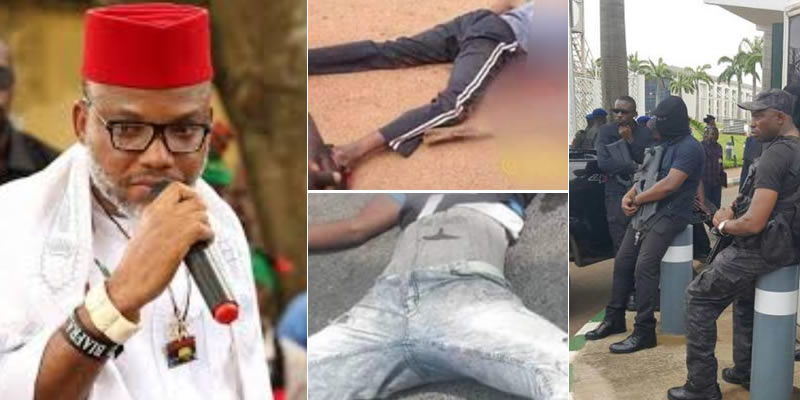 The Good Conscience Forum (GCF) says the call by the leader of the Indigenous People of Biafra (IPOB), Nnamdi Kanu for his members to attack security operatives is a “significant threat to the peace and tranquillity in Nigeria”.

The group, in a statement signed by its National President, Dr Edwin Ogbu, on Friday urged relevant authorities to take proactive action to avoid a breakdown in law and order.

Recall that the Department of State Services (DSS) had said that two of its operatives were killed on Sunday in a clash with IPOB members in Enugu State.

While condemning IPOB for the attack, the group reasoned that the proscribed sect may just be carrying a plot by its paymasters.

“The Good Conscience Forum is in receipt of the call by the leader of the Indigenous People of Biafra (IPOB) for its members to attack security operatives and other innocent Nigerians going about their lawful businesses in South-East Nigeria,” Ogbu said.

“This call by Nnamdi Kanu is indeed a significant threat to the peace and tranquillity in Nigeria because of the implication of such on the social fabric in the country and a reason why the government should not treat it with kids gloves in all ramification.

“The Good Conscience Forum as a critical stakeholder in the Nigerian project condemns the actions of Nnamdi Kanu and wishes to put it on record that should there be a breakdown of law and order in any part of Nigeria; the government must do all within legal means to serve justice to serve as a deterrent to other militant groups threatening the peace and tranquillity in Nigeria through their nefarious activities.

“We consequently condemn the call by Nnamdi Kanu in very strong terms as Nigeria is a sovereign country governed by extant laws in the conduct of its affairs. We also condemn in totality the recent clash between security operatives and IPOB members in Enugu State that led to the death of two security operatives and life threatening injuries to scores of other innocent people.

“It would indeed not be farfetched if IPOB is carrying out the script of some individuals and organizations that are bent of instigating conflict in Nigeria that would lead to a total breakdown of law and order.

The GCF, however, called on southeast governors, stakeholders and parents to call their children and wards to order, not to allow anyone to be recruited by IPOB for its nefarious activities.

It said, “As it stands, the activities of IPOB stands proscribed by a court of competent jurisdiction and as such members that engage in any form of criminality must be identified and made to face the full wrath of the law.

“We wish to advise members of the general public to assist the security agencies in Nigeria by continually providing credible information that would lead to the arrest and subsequent prosecution of IPOB members for the threat to human lives and the unity of the country”.

The Good Conscience Forum further called on the government to probe the clash between IPOB members and security agents in Enugu state that led to the loss of lives of two security operatives in the line of duty.

It added that IPOB is a danger to the peace and unity in Nigeria and threats by Kanu should be taken seriously before it escalates to other parts of the country.