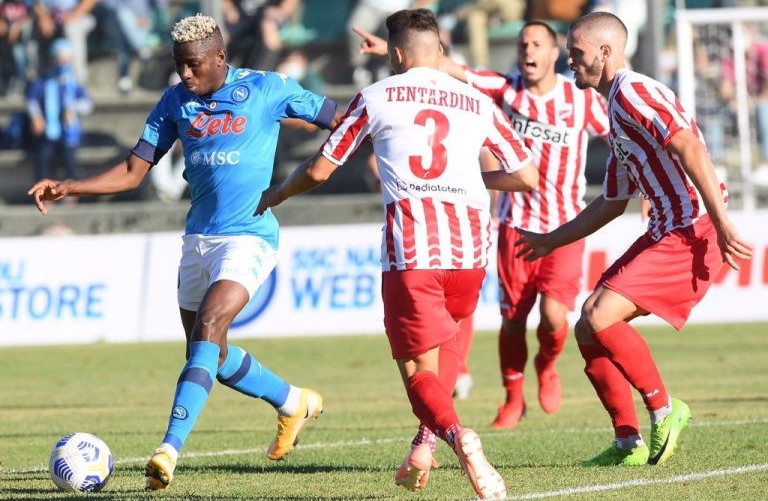 Nigerian striker, Victor Osimhen bagged another hat-trick for Napoli in their 4-0 win over Italian third division side, Teramo, on Friday.

Friday’s tie at the Patini Stadium in Castel di Sangro was Napoli’s second pre-season warm-up game and Osimhen once again was the star attraction.

The former Lille striker had announced himself with an eight-minute hat trick last Friday when Napoli won their first preseason game 11-0. While Friday’s win was just 4-0, Osimhen still got three of the goals.

Joining Osimhen on the scorers’ sheet for Napoli in Friday’s outing was Hirving Lozano.

Osimhen opened the scoring for Napoli in the 4th minute before Lozano doubled the lead for Genarro Gattuso’s side 10 minutes after.

With 15 minutes remaining in the game, Osimhen was substituted.

With 15 goals from two games and none conceded albeit against less-fancied oppositions, Gatusso will be impressed with the way his team is performing ahead of the fast approaching 2020/2021 football campaign.

Napoli will kick-off the Serie A season with an away game against Parma.

The Naples-based side finished in the seventh position on the final Serie A log last season.