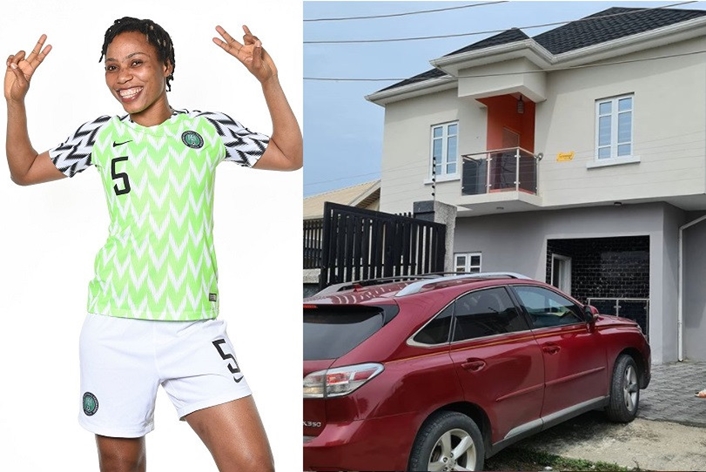 Super Falcons star, Onome Ebi has acquired a brand new house in Lagos and she is grateful to God.

The 37-year-old footballer who currently plays for Henan Huishang in the Chinese Women’s Super League, took to Instagram to share a photo of her new house and wrote:

“I just want to say thank you Lord God for all. Dreams do come TRUE if you keep believing in yourself and never give up”

I just want to say thank you Lord God for all 🙏😩. Dreams do come TRUE if you keep believing in yourself and never give up 🏠.

In other news, after reports that Nigeria’s star athlete, Blessing Okagbare filed for a divorce suit to end their six-year marriage,her husband Mr Igho Otegheri, reacted.

In an interview with Saturday Beats, Otegheri admitted that his marriage to the athlete was headed for the rocks but added that he won’t comment more on the issue to avoid “tarnishing” the image of Okagbare.

When our correspondent asked Otegheri on Facebook if it was true that Okagbare had filed for divorce, he replied, “It’s true. It is what it is, boss.”

“No matter what, I can’t say anything that will tarnish her (Okagbare’s) image, please try and understand. It will be a disaster if I come out to clear the air.”

Though quite unknown, ex-international Otegheri began his professional football career with Wikki Tourist in 2004, before a switch to former Nigerian champions Enugu Rangers, where he spent two years.

He joined defunct Dolphins in 2007, before another sojourn at Heartland, where he plied his trade until 2009, when he moved to Europe for a short stint at Beitar Jerusalem in Israel.

Otegheri, who has three caps for Nigeria, made his Eagles debut in 2002 in an international friendly against Costa Rica.