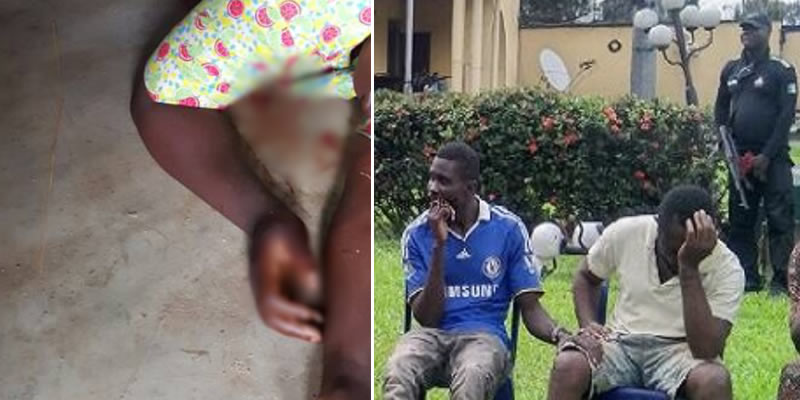 Two suspects allegedly linked to the disappearance of a single nursing mother in Nwachukwu’s neighbourhood, Chinonye Queen Uzoma and her three-month-old daughter, who were said to have been declared missing for several weeks have told the police in Rivers State how they killed a mother of a three-month-old child, sold the baby and shared the proceeds before luck ran out on them shortly after.

The two suspects, Mary Ishmael (68) and her foot soldier, 23-year-old Chinedu Nwachukwu are members of a notorious child trafficking gang, they were among the 15 suspects paraded by the Rivers State Commissioner of Police, Joseph Mukan, in Port Harcourt, Rivers State on Thursday.

One of the suspect, Nwachukwu was arrested by men of 48 PMF who were on stop-and-search duties at Omerelu Nipping Point near Owerri, Imo State while carrying a five-month-old baby he allegedly could not explain how he came about.

He was detained at Elele Divisional Police Station and later transferred with the child to the State Criminal Investigation Department (SCID) where he allegedly confessed to have stolen the baby after killing the mother and pushing the body in a pit in an uncompleted building around Igwuruta, Ikwerre Local Government Area of the state.

According to the police, Nwachukwu confessed during interrogation that he also killed another lady named Uzoma, disposed her body in a forest and sold her baby to Ishmael in the sum of N250,000, while the latter sold the baby to a Benin, Edo State resident in the sum of N350,000.

Nwachukwu said: “This woman (pointing at his 68-year-old accomplice), was the one that sent me to snatch the babies. After killing the first woman, I sold her baby to this woman in the sum of N250,000 and she resold the baby to somebody in Benin in the sum of N350,000.

“But while the first woman I sold her baby died in the process and I threw her body into a forest at Igwuruta where we live, the woman whose baby I was also going to sell to Mama (Ishmael) before I was arrested survived despite pushing her into a pit.”

“For the first woman, I hit her with a club in the back several times and she fell down and died. I then took the body and dumped it in a forest at Igwuruta.

“I have taken the police to where I threw her body. But before we got there, her flesh had decayed, leaving only the bone. This happened since June. It is now three months since I killed her.

“The second woman survived the attack. What happened was that I hit her once in the back of her head, quickly pushed her into a pit in an uncompleted building and ran away with her baby. It was while I was going to take the baby to Mama where she asked me to bring the baby that I was arrested by the police.

“When I was arrested, the police asked me the whereabouts of the mother of the baby and I told them that she has died, narrating how I killed her and pushed her into a pit.

“I thought that like the first woman, she would die in the pit. But when I took the police to the pit, she was still alive but very weak. The police brought her out and took her to the hospital, and she survived.”

The crime strategist, 68-year-old Ishmael, on her own part said: “I am a nurse. I carry out child delivery for pregnant women. I work in a hospital and also operate a shop. I am very popular in my neighborhood.

“It was Chinedu (Nwachukwu) who approached me, saying that his girlfriend gave birth to a baby and ran away. He said he lacked the capacity to nurture the baby, so he wanted to give her to a couple that was looking for children for a fee.

“He said there is no cause for alarm, that the baby’s mother was aware of the decision to sell her.

“I was skeptical initially and did not want to get involved, but he persisted. It so happened that a family in Benin had some time ago approached me to look out for such babies for them; that they would be interested in raising such babies for themselves.

Asked the role she played in the snatching of the second baby, she said she knew nothing about it. But Nwachukwu insisted that she was the mastermind and that he was on his way to where they had agreed to meet for the transaction when he was arrested.