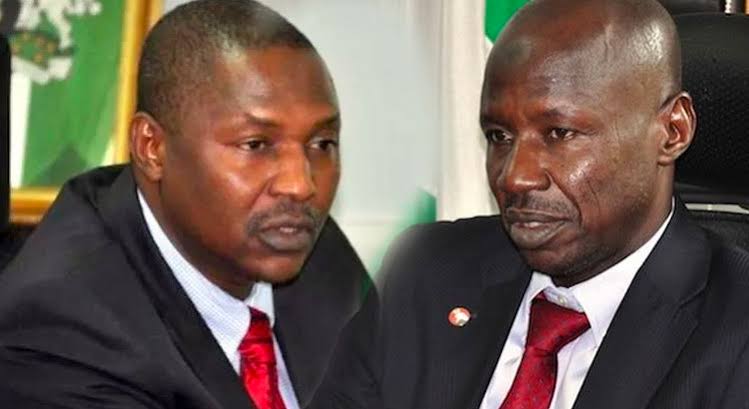 I am not afraid to testify, Malami fires back at Magu

The Attorney-General of the Federation and Minister of Justice, Mr. Abubakar Malami, SAN, yesterday expressed his readiness to appear as a witness in the ongoing probe of the suspended Acting Chairman of the Economic and Financial Crimes Commission, EFCC, Mr. Ibrahim Magu, by the Justice Ayo Salami-led panel of inquiry.

Malami, while responding to Magu’s fresh application to summon him as a witness, said he would readily and gladly testify before the panel whenever he was invited.

In a statement signed by his media aide, Dr. Jibrilu Gwandu, Malami made his position on Magu’s application known when he appeared as a guest on ‘The Morning Show’ programme of Arise Television.

The statement stated that the AGF attended the television programme to discuss the recent developments relating to Nigeria’s arbitration on the disputed Process & Industrial Development, P&ID, contract agreement.

It would be recalled that Magu, who is facing probe over allegations bordering on abuse of office and mismanagement of federal government’s recovered assets and finances from May 2015 to May 2020, had through his lawyer, Mr. Wahab Shittu, applied for Malami to be compelled to appear before the panel to give evidence and tender a copy of the memo to President Muhammadu Buhari that led to his suspension as EFCC Chairman.

Magu relied on Section 5(c) of the Tribunals of Inquiry Act 2004, which he said empowered the tribunal to summon any person in Nigeria to attend and give evidence or produce any document or other things in his possession and to be examined as a witness.

President Buhari reveals why he ordered the probe of Magu

Responding yesterday, Malami, who said he would readily do anything to assist the probe panel, stated: “Within the context of the rule of law, I have a responsibility as the chief law officer of the country as Attorney-General of the Federation and Minister of Justice to assist whatever investigation taking place locally or internationally.

He said: “For your information, I have signed and executed around eight witness statements before the Commercial Court in UK which translated to the victory we are celebrating today.

“So, the idea of testimony, the idea of appearance of the Office of the Attorney-General and, indeed, with the particular reference to Abubakar Malami before any panel, before any tribunal, local and international, for the purpose of supporting an investigation that will see to the establishment and unraveling the truth associated with an issue under consideration, is not new.

“I will in no way exercise any restraint as per honouring an invitation for the purpose of supporting any inquiry.