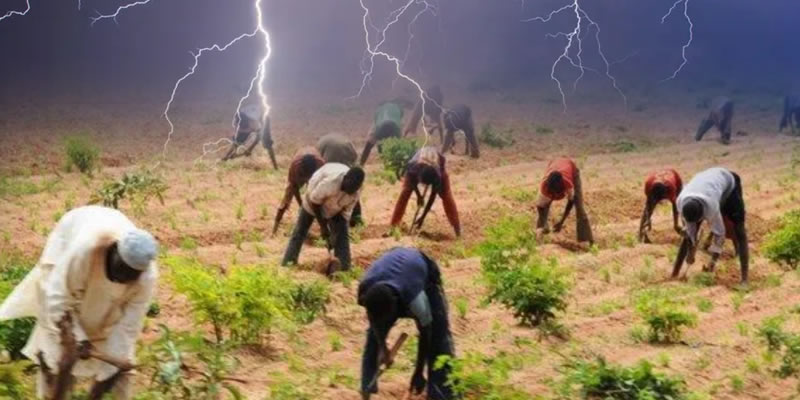 Thunderstorm kills 3 kinsmen, injures 2 others on their farm in Katsina

Tragedy has hit a family after Thunderstorm killed three of their member in Kukar-Gesa Village, Katsina Local Government of Katsina State on Saturday September 12.

WITHIN NIGERIA learnt that the three family members who were farmers, were hiding under a big tree when a heavy rainfall interrupted their activities while working on their family farm cutting down the millet that had become ripe.  Unfortunately, thunder strike at the tree where they took shelter during the downpour and and three out of the five farmers lost their lives while two survived but sustained injuries.

Recounting the family’s ordeal, the head of the family who confirmed the death of his two children and a grandson, considered their death as an act of God.

“The rain started at about 5:00 pm on Saturday, after the rain stopped at about 11:00 pm and they were nowhere to be found.

“The family dispatched a search party that uncovered the bodies of the deceased and rescued the surviving two and rushed them to the village dispensary.” He said.

The family has announced the death of the deceased, the three deceased had been buried on Sunday morning at Kukar-Gesa cemetery according to Islamic rites.

Lady Dies Mysteriously Three Hours To Her Wedding In Katsina