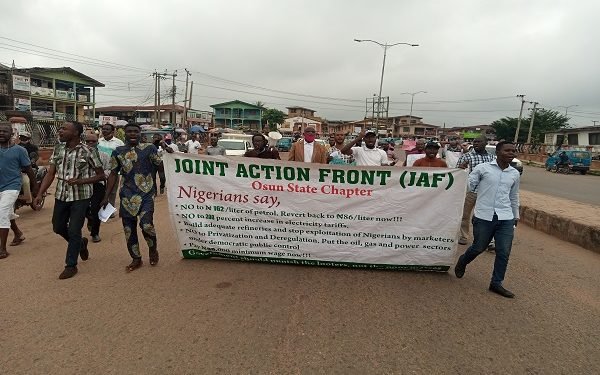 Protesters under the aegis of Osun Civil Society Coalition have stormed the streets of Osogbo, the capital of Osun State on Wednesday morning demanding for the resignation of President Muhammadu Buhari over refusal to reduce the hike of electricity tariff and petrol price.

This came barely one week after protesters mostly Nigeria students and comrades stormed the streets to protest the hike in petrol price and demanded for reduction.

WITHIN NIGERIA gathered that the protesters mostly youths gathered at Nelson Mandela Freedom Park, Old Garage area around 8:15 AM and started the protest at about 9:07 AM.

The protesters while marching across the streets with their banners and placards chanting anti-government songs, they also demanded for the resignation of President Muhammadu Buhari.

On the banners were several writings such as ‘Nationalise the oil sector under workers democratic control’, ‘no to fuel, electricity tariff, ‘Buhari govt anti-poor’ among others.

Service chiefs will remain as far as Buhari is satisfied with them,…

One of the lead protesters identified as Waheed Saka said, “Nigerians have never had it so bad like we are under the current administration. We are here to protest against the hike in price which is not affecting businesses.

Another activist but a lawyer, Comrade Alfred Adegoke said we are on the streets today to call for the resignation of President Muhammadu Buhari for his refusal to revert the electricity tariff and petrol price.