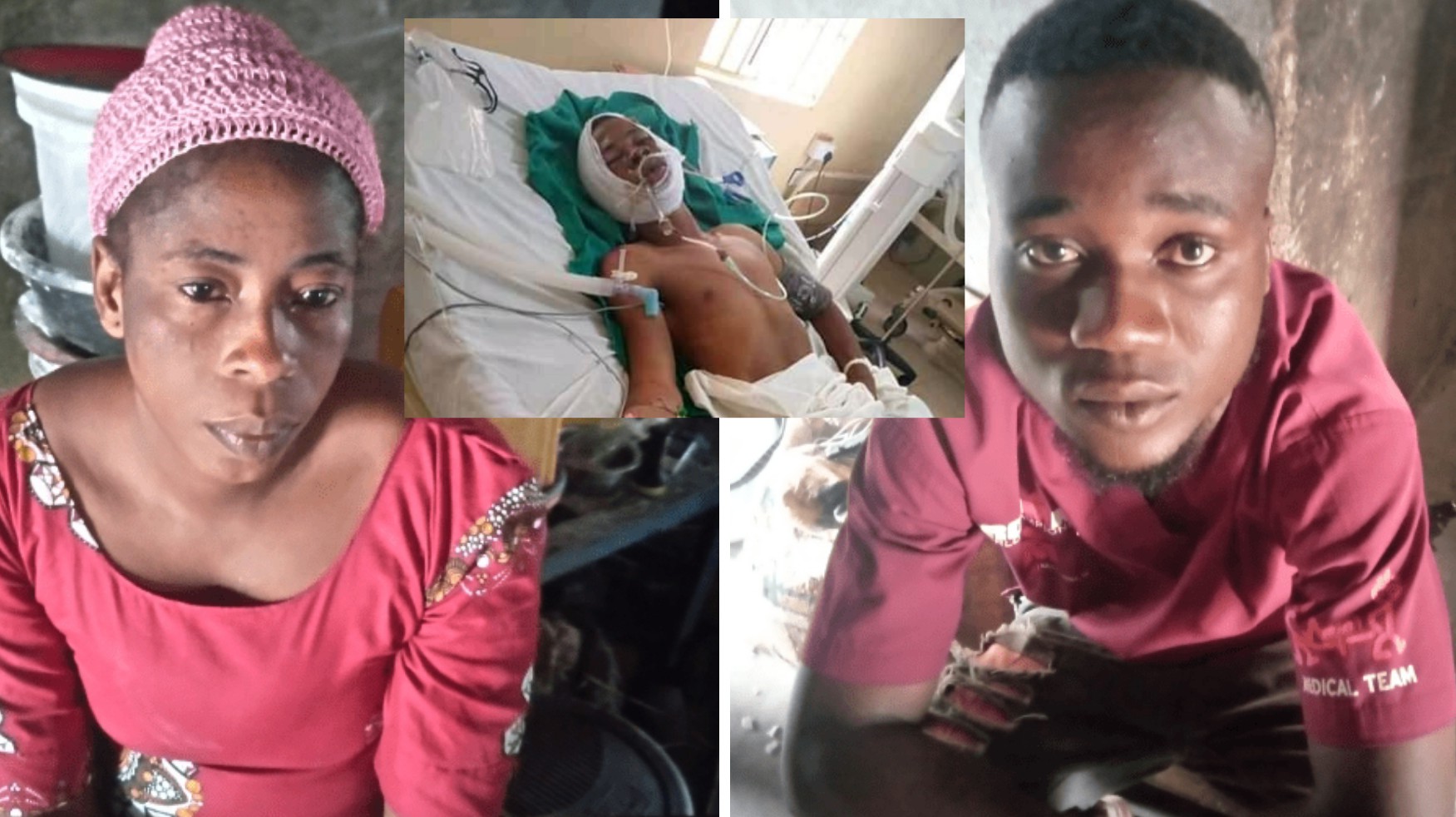 The mother of 20-year-old Ayomide Taiwo, has narrated her ordeal after an officer from the Osun State Police Command allegedly killed her son over alleged N50 bribe.

Ayomide, a fashion designer died on August 9, 2020, days after one Inspector Ago Egharevba, attached to Obokun Divisional Police Headquarters, hit him on the head with the butt of his gun.

The Widow, Yemisi Taiwo weeping while narrating her ordeal said that her husband died a few months after Ayomide was born on September 8, 2000 in Iragbiji, Boripe Local Government Area of Osun State and since then, the care of the family fell on her shoulders.

Due to lack of financial resources Ayomide discontinued his education and enrolled as an apprentice with a fashion designer in the same town towards the end of 2016. At the end of the training in 2019, he embarked on petty sewing to raise funds for his graduation ceremony which was fixed for September 10, 2020.

Adding that Unfortunately, her son’s graduation ceremony was cut short by one Inspector Egharevba.

It was gathered that on August 3, late Ayomide returned home from Owena where he was practicing his trade to celebrate the Islamic festival Eid-el-Kabir with his mother.

Days after the celebration, Ayomide and his friend Wasiu Oladimeji rode back to Owena on his new motorcycle. Before he departed, his mother advised him not to argue with with bribe-seeking police officers on the road. She also recalled giving him 10 N50 notes (N500) for the bribes.

At Ere Junction in Obokun, Ayomide and his friend were accosted at a checkpoint by four police officers attached to Obokun Divisional Police Headquarters.

According to Oladimeji, the police officers demanded a bribe and in the course of negotiating the bribe, inspector Egharevba, who appeared drunk, hit Ayomide with butt of his riffle.

“The officer was angry that he offered them N50. After hitting Ayomide’s head, we both fell from the motorcycle and blood was rushing out from his head, nose, mouth and ears. I also suffered injury,” Mr Oladimeji said.

“Immediately that occurred, the officers who were not drunk ran away. As the one who carried out the attack was trying to escape, he was apprehended by passersby. We were later asked to rush Ayomide to hospital.” he added.

Yemisi was alerted by some people that her son was attacked by a police officer and she quickly ran to the scene.

“A few minutes after he left, some people ran to my house crying that Ayomide had been attacked by a police officer. I was curious, knowing full well that my son was not a trouble-maker. Upon getting there, I met him in a pool of blood,” the mother recalled in an interview.

The family took Ayomide to Ladoke Akintola Teaching Hospital (LAUTECH), Osogbo where he was admitted into the intensive care unit. He spent six days in coma until he eventually passed away on August 9.

“If I knew he was going to die, I would not have allowed him to leave,” the widow said.

A day before his death, the DPO of Obokun police station, simply identified as Mr Atanda, came to the hospital with N30,000 and never returned. He has since refused to respond to calls from the victim’s family members.

“To ensure my son survived, I sold my two farms for N350,000 and also took extra loan but it did not end well. Now, I have no child to look after me,” Yemisi lamented.

“Even at 20, he was the breadwinner of the family and the go-to person either financially or in other sundry areas I needed assistance. The world has ended for me as my star had gone. Ayomide was a reflection of his name and I doubt if I will recover from the grief.” she said.

Buttressing his mother’s account, Adebayo, an elder brother to the deceased, said the family wants justice to be dispensed over the incident. He said the family spent over N400,000 to save Ayomide’s life but it was in vain.

While the officer who fatally attacked Mr Ayomide is in custody, the family said the police did not assist with the hospital bills. They accused the police of negligence and inhumane acts.

“After Ayomide was confirmed dead, we were given another bill of N79,000 to pay at LAUTECH to claim the body. Unfortunately, the money I had alongside my mum that day was just N11,000. I called the police DPO to inform him but he shouted at me on the phone that we should ‘dump’ him in the mortuary. Since then, he has not responded to my calls and we don’t know how to get Ayomide out of the mortuary. We ought to have buried him but we are scared of incurring more debt. So, he’s still in the mortuary as we speak,” Adebayo concluded.

The Commissioner of Police in Osun, Undie Adie, had recommended the dismissal of Mr Egharevbe, the officer who attacked Ayomide, to the Inspector-General of Police.

On August 17, a Magistrate Court in Obokun remanded the officer for the killing which the prosecution said is contrary to and punishable under Section 319(1) of the Criminal Code Cap. 34 Vol. Il Laws of Osun State of Nigeria, 2002.

The Magistrate, B.O. Awosan, remanded the accused in Ilesa Correctional Centre and adjourned the case till October 19.