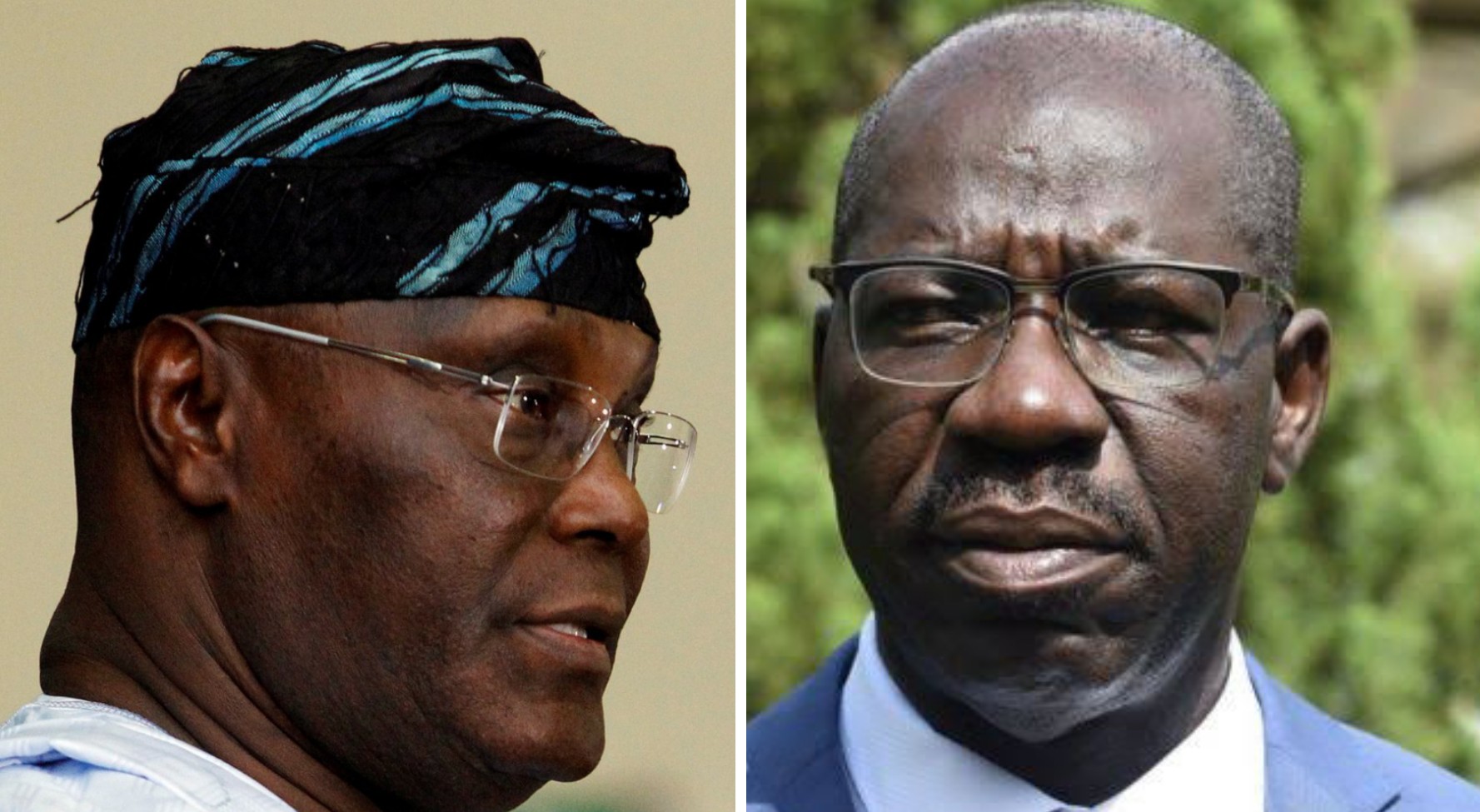 Atiku Abubakar, former Vice President, has congratulated Edo State Governor, Godwin Obaseki, on his victory in the governorship election held in the state on Saturday.

Obaseki , candidate of the People’s Democratic Party (PDP), was declared winner of the election by the Independent National Electoral Commission (INEC), having polled the highest number of valid votes cast.

Obaseki polled 307, 955 votes to defeat his closest challenger, Osagie Ize-Iyamu, candidate of the All Progressives Congress (APC), who came second with 223, 619 votes.

In a statement he personally signed, Mr Abubakar also commended the people of Edo State for their resilience in the face of the forces arrayed against them, saying the victory of Mr Obaseki ”is not just a victory, but a declaration of Independence from the anti democratic forces of godfatherism and militarism.”

Abubakar declared that ”Edo has a rich history as the centre of Black civilisation, and to this, she is adding a new history as the bastion of Nigerian democracy. This double whammy of ancient and modern glories is a testament to a people who have for centuries set the pace as a beacon of light on the African continent.”

He also congratulated the party whom he described as standing ”shoulder to shoulder with the people of Edo and their Government, in good times and bad.”

”We, in the PDP, have shown that we are not fair weather friends to the good people of Edo. In good times, we will walk beside you. In bad times, we will be your true ‘comrade’. We will never be a turncoat. We will never abandon the principles we once espoused, so we can dine with our nemesis. Democracy has no nemesis. And this, the PDP has again proved,” he said.

Abubakar said that he looks forward to the continuation of four more years of tangible development, and people centred leadership from Governor Obaseki.

He also prayed the Oba of Benin, Omo N’oba N’Edo Uku Akpolopkolo, Ewuare II, for what he described as the fatherly role he played as a neutral catalyst for peace., saying ”that the election was, by and large, free from violence, is a testament of the long and effective shadow he casts over his domain.

”From personal experience, I know Governor Obaseki to be a magnanimous man, and I urge Pastor Osagie Ize-Iyamu to accept the right hand of fellowship that is likely to be extended to him.

The leprous hand he is now holding, can only lead to a destination of barrenness. He is amongst strange bedfellows, and I remind him that no matter how far one has gone on a wrong road, it is never too late to turn back and head in the right direction. The PDP is the right direction,” Mr Abubakar said.

He equally advised the people of Ondo state to free themselves from ”the oppressive grasp of godfathers and external forces that seek to dominate your will, and eviscerate your treasury, is possible. Edo has done it. You can do it too!”

The people of Ondo State will be heading to the polls on October 10 to elect their governor.

”There is a new wind of democratic change now blowing all over Nigeria. The forces of despotism, nepotism, and interlopers cannot successfully withstand this force. Nigeria shall soon be totally free from these forces, from Kaura Namoda, to Lagos. The only power that will stand in Nigeria is people power, not the power of godfathers, or despots.