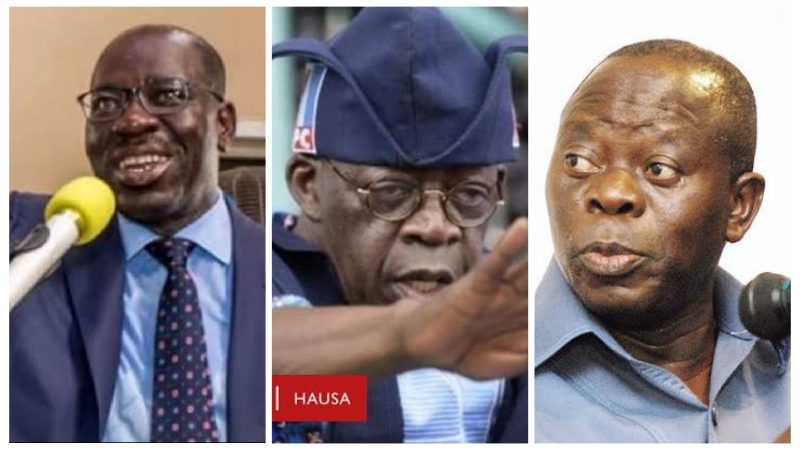 Edo state gubernatorial election has come and gone. In every election, there can not be two winners. Among all contestants, one must win and others must bear the pains that come with loss. Election is not really different from war. Formations, weapons, skills and supports are elements of the duo.

The only difference between election and war is very clear; people use guns, cutlasses and heavy metals to fight during wars while people use voter cards to participate in elections. As tough as the battle between two groups may be, if there are gaps or confusions in a group, they allow other group to win easily. Those who find means to console themselves after every war or election always conclude that there is no winner or loser. In Edo Saturday’s election, there was a victor and vanquished. I congratulate His excellency, Governor Godwin Obaseki over his unexpected victory.

Yesterday, I was chatting with a brother and friend who owns one of the biggest law chambers in Nigeria, law corridor. Besides its greatness, the slogan of the chamber is heroic; ” the chamber where goats eat lions and lions dare not complain”. When I reflected on statements that best described what happened in Edo, I could not find a better one than the slogan of law corridor.

As at Saturday morning, the executive Governor of Edo State, Godwin Obaseki and his team were not sure of winning. They probably had thoughts of being devoured by political giants who were on the mission of sending them away from Edo government house. I do not know if Obaseki and his team watched the last interview the suspended chairman of All Progressives Congress granted; if they did, it would have surely made them fear the more. Oshiomole did not talk like a prophet but spoke like a god. He vowed to tear Obaseki’s garment of authority and make him irrelevant in Edo politics.

To be honest, I never expected that Godwin Obaseki would defeat Pastor Ize Iyamu with more than 80,000 votes. Looking at the calibre of strong politicians Oshiomole pulled to his side and addressed as political lions, none would not have predicted victory for Obaseki. We all thought the political lions had the funds, influence also known as federal might and the blessings of the presidency but we were wrong. Just like the biblical story of Esau-Jacob, President Muhammadu Buhari truly handed over the party’s flag to Pastor Ize Iyamu but the ‘presidency boys’ who are fighting domination but also want to dominate were either neutral or gave all the support to the other candidate.

President Muhammadu Buhari, the leader of the ruling party believed that he has resolved the differences between Tinubu’s camp and presidency boys. Pastor Ize Iyamu travails started when President Buhari allowed the positions of expunged executives of the party on Edo politics to stand. People (presidency boys) who were angered by the processes that led to his emergence as party’s flagbearer intentionally kept quiet to respect the verdict of their leader but they had their plans in mind.

The ‘presidency boys’ abandoned the rally and did not make provisions for logistics. They equally recieved support from the anti-Oshiomhole; politicians who experienced great intimidation through denial of party tickets or intended godfathers whose dream were cut short by Adams Oshiomhole all joined together to bury him politically. A closer look at the Edo poll, one would know that the contest was not really between Pastor Ize Iyamu and Obaseki but a contest between ‘Tinubu’s camp’ and the ‘presidency boys’. The factions in APC made Edo a testing ground and Pastor Ize Iyamu was the sacrificial lamb.

Besides the internal conflict in the ruling party, the recent hike in fuel prices and electricity tariffs were part of factors responsible for APC loss in Edo. The people protested with their votes and peacefully sent a message to Aso-Rock that they are not doing well with their hunger and poverty driven politics. Some quarters insinuated that the visa bans and restrictions from United States averted the violence and tragedies that would have come with the election. I equally believe that Edo would have been messier owing to desperation of parties but they calmed themselves knowing that there will be consequences.

Adams Oshiomhole’s greatest weapon is his tongue. He is fond of using his tongue without caution. Sabura, a scriptural book described the tongue as a lion that has capacity of self destruct if it’s freed carelessly. If Oshiomole knew that there would be a day his 2016 political enemy, Pastor Ize Iyamu would become his favourite, he would not have dug wider graves that eventually buried them all. No matter how fatal one’s fall is in life, it will still be used examples for others. We all need to take lessons from the temporary downfall of Adams Oshiomole; lessons of caution and humility. When we fight, let us create impressions of reconciliation because it guides in digging of graves for enemies.

The broadcast issued by the regional leader of the ruling party, Asiwaju Ahmed Tinubu was very unncessary and could not help in Edo poll rather it made things worse. Edo people came out enmasse to prove to the entire world that strangers dare not intervene in their politics and become victorious. All the political lions were caged by their opponents and frenemies because they have a sole interest of keeping a growing political empire to its size.

Truly, Edo is the state where goats eat lions and lions dare not complain, apologies to the principal partner of Law Corridor.

Till we meet in the next edition of TIME-BOMB, be a responsible Nigerian.