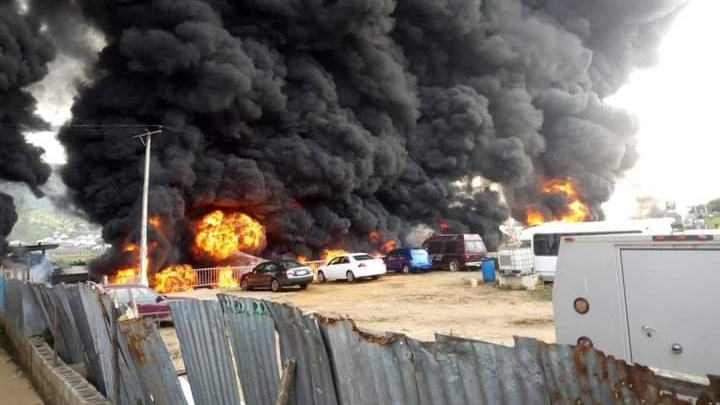 Following a massive explosion of a petrol tanker which engulfed five other vehicles at the Felele area along the Lokoja-Abuja highway in Kogi state on Wednesday, no fewer than 23 people have been confirmed dead and many others injured.

The tragic incident has been confirmed by the Federal Road Safety Commission (FRSC) which stated that it recorded 23 deaths while residents of the area argued that more than 50 people lost their lives.

As at the time of filing this report, the whereabouts of some students of Kogi State Polytechnic could not be ascertained and two families have lost 11 members in the carnage.

According to eyewitnesses, the tanker rammed into five cars, two motorbikes, and three tricycles killing all the occupants and some bystanders.

The place where the accident occurred is said to be a death trap that claimed dozens of lives in the last few years.

The Sector Commander of the Federal Road Safety Corps (FRSC) in Kogi State, Idris Fika said at least 23 bodies were recovered from the scene of the accident.

Immediately after the fatal accident, officials of the FRSC arrived the scene, evacuated the corpses which were reportedly burnt beyond recognition, while locals made frantic efforts to identify the deceased.

Following records of repeated accidents in the area, students of Kogi State Polytechnic stormed the streets to protest the accidents which caused tension in the community.

A trader simply identified as Sikirat described the scene of the accident as “gory”.

“The driver of the petrol laden truck lost control after brake failure…The location is a bit sloppy and it appeared the driver was helpless and when it was evident there was nothing he could do, he rammed into five other oncoming vehicles,” she said.

“The truck immediately went in flames and within the twinkle of an eye, the inferno enveloped other vehicles and the people trapped in them were burnt. They were wailing and crying but there was nothing that could be done to help them,” she said.

Another witness who gave his name as John, said, “I was about crossing the road when I noticed the tanker driver signalling to motorists to steer clear, but suddenly it tilted on its side falling on vehicles beside it.

“Immediately the tanker fell, a fire erupted and incinerated all vehicles along its way,” he said.

One of the families who lost their loved ones is the family of a popular cleric, Malam Idris Yusuf who lost six members.

The arabic scholar who teaches students in an enclosed Arabic school also resides in the Felele community and the rest of the family have been battling with realities.

His children, Aisha, Aisha Junior, Wasila, Faiza, Ibrahim and Abdul-Mutallib were heading to school in a vehicle when the incident happened and they were all killed.

He was said to have slumped when the news of their demise filtered in. “The whole family is in mourning following the demise of these wonderful children,” a neighbour said.

“We pray Allah to grant the deceased Jannatul Firdausi and the family the fortitude to beat the loss,” another sympathizer said.

According to report, a popular businessman called Samson, wife, three children and a neighbour’s son were among the victims of Wednesday’s tanker explosion.

Samson had reportedly conducted morning devotion at his family house before setting out, a neighbour said.

At his house located behind 4Season Restaurant in Felele, close to Abuja-Lokoja highway, neighbours sat in a group at the entry mourning the man described as “easy-going”.

But Mama Elijah,  who lived three houses away from that of the deceased, told Daily Trust that Mr Samson popularly known as Sabere Diowo, left with his family in his SUV not 10 minutes before the accident happened.

She said the tanker rammed into the deceased’s vehicle while he was waiting for his side of the road to clear before accessing the highway.

“There was commotion everywhere and when we ran out, there was a heavy explosion and ensuing inferno, which prevented people from accessing the scene,” she explained.

She said the victims, the deceased, his wife, Mrs Elizabeth and all the children in the vehicle were burnt without recognition.

She said, for now, only Isaiah, the eldest son of the deceased who is away in school in Oyo State remains in the family.

“The whole family is literally wiped out,” she said.

“It is sad that the entire family is almost gone,” she added.