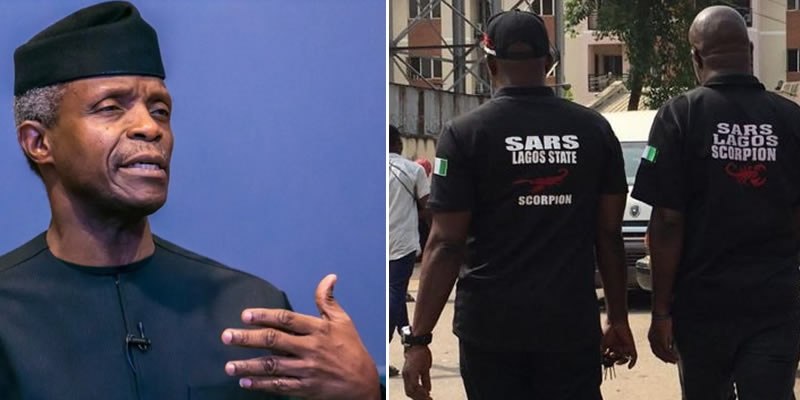 Nigeria’s Vice President, Yemi Osinbajo has expressed his displeasure over the harassment of Nigerians by operatives of the Federal Special Anti-Robbery Squad (FSARS).

This was made known by the Vice President while speaking to State House Reporters during an interaction at his Abuja residence on Sunday.

Osinbajo also hailed the Inspector-General of Police (IGP), Mohammed Adamu, for banning routine patrol of the FSARS and other tactical squads of the Nigeria Police Force (NPF).

Osinbajo also condemned the routine harassment of young Nigerians by operatives of the FSARS, describing the development as infuriating.

While condemning the actions of those officers he described as “bad eggs of the Force,” the Vice President asked the police to stick to their mandates.

“I am very concerned, in fact, very angry about what I see, happening to young men and women who are arrested, in some cases maimed or killed by men of the police force,” he said.

He also commended Civil Society Organisations (CSOs) for speaking up against injustices meted out by some security operatives on young people.

Such violations, according to Osinbajo, are “completely unacceptable because these are individuals who are meant to protect Nigerians. The arrest, maiming or killing of young people or anyone at all, is completely wrong. It is unlawful and illegal, and anyone involved in this act ought to be investigated and prosecuted.”

The Vice President said: “Today, I had a meeting with the Inspector General of Police, we reviewed several of these issues. The President and I have had discussions on this; he is very concerned about it. He wants to see a reform.

“You are probably aware that the IGP has issued a statement looking at all these issues, in particular, the warning against the use of these tactical units such as SARS for purposes of doing anything other than anti-robbery.

“For example, and I think in his statement, he specifically said that you cannot have a situation where SARS says, they are investigating Cybercrime by arresting young men and women carrying their laptops and phones. Cybercrime is an electronic crime. I don’t see how you can investigate that by seizing people’s phones in a taxi or in their cars.

“It is very obvious that this is a major concern, a few bad eggs in the police force are causing all of these problems because it is all over the place, in different states. There is a need to take serious action.

“The IG’s statement today, is a good first step. He has said clearly that police men must wear police uniforms. You cannot say that because you belong to a tactical unit, you can dress in your casual clothing and be armed because people can’t even tell the difference between robbers and the police, if you are not properly dressed in police uniform. So, clearly, a reform is in the offing.

“So, I will like to encourage civil society activists, young men and women, who bring this regularly, by the way, to the attention of government and the police.

“And I think that activism is important because they have been able to bring a lot of these issues to the attention of the police and government, and that is an important part of the process of the reform.”

Urging that all hands be on deck to effect reforms, the VP said: “I think that we all have to work together to ensure that the police and law enforcement agents, do what their duty is and their duty is to protect us, protect our society and livelihoods and homes.

“By the way, many of them are doing their duties excellently well, but there are some of them who are engaged in these activities. So, we must see this as something we all must work together to achieve, as individuals, to bring to the attention of the police and government, where there have been violations.

“And on the part of government and the police: to ensure that every one of those allegations is properly investigated and those found responsible are prosecuted and publicized so that people know that prosecution has taken place and this is the consequence. I am very confident that we will have a reformed police force and that process has already begun.’’