The former Minister of Communciations Technology, Dr. Omobola Johnson has narrated how her son allegedly suffered harassment from an operative of the special anti-robbery squad (SARS).

This revelation was made by the technocrat via Twitter on Saturday October 10 as she joined the call to end SARS.

Dr. Omobola said her son was standing in front of their gate when the officer came and accused him of loitering. When her son tried to explain, the officer cocked his gun and threatened to shoot him.

“My son was in front of our gate. He was told he was loitering. He was explaining that he lived there. The policeman cocked his gun and threatened to shoot him if he spoke again. My son kept quiet. Thank God he did. We really have to put an end to this #EndSarsNow” she wrote.

“@PoliceNG #EndSarsNow . The tech industry is one of the fastest growing in this country and has been for many years. It is highly dependent on young people. We will truncate this growth if we don’t stop this unwarranted harassment of our youth.” she added. 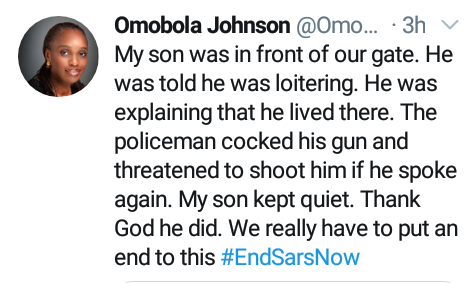 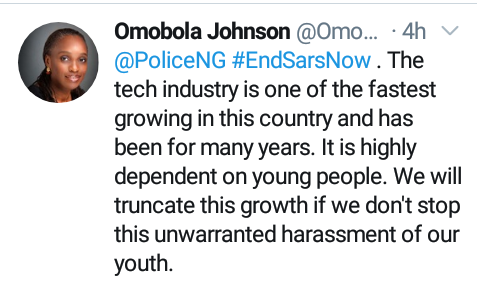 #EndSARS: Nigerian footballer narrates how SARS officers allegedly demanded for $1,000 from him

I slept at T.B Joshua’s church’s altar for weeks, got no miracle, Daniel Amokachi says