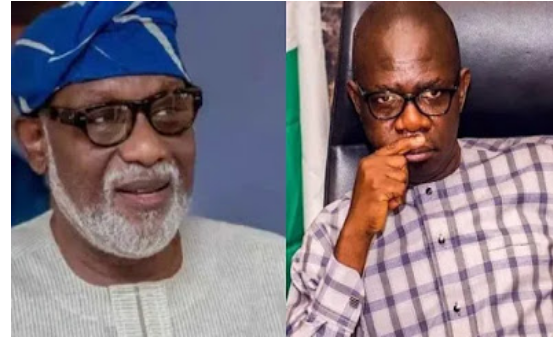 The Executive Governor of Ondo state, Rotimi Akeredolu has stated that if his incumbent deputy, Agboola Ajayi is “contrite”, he will be accepted back into the All Progressives Congress (APC).

This statement was made by the Ondo state governor while speaking with journalists on Tuesday after he presented his certificate of return to President Muhammadu Buhari.

Recall that his deputy, Ajayi had dumped the ruling party for the Peoples Democratic Party in the build-up to the just concluded election in Ondo state.

But Agboola Ajayi left after he lost the governorship ticket to Eyitayo Jegede; the deputy governor eventually moved to the Zenith Labour Party (ZLP).

Earlier on Tuesday, the Independent National Electoral Commission (INEC) had presented certificates to Akeredolu and Lucky Aiyedatiwa, the Ondo deputy governor-elect, after the APC was declared winner of the October 10 governorship election.

Speaking after the visit to the president in the company of Mai Mala Buni, caretaker chairman of the APC, Akeredolu urged Ajayi to resign with honour.

“There is a way you will live with your enemy, and there is no problem I have now that we have drubbed him sufficiently well. He will probably be able to come back and at least apologise for his sins. If he is contrite, there is no problem,” Akeredolu said.

“God has given us victory. Who am I to harbour enmity against anybody? It is not necessary. So, if he comes back, if he has honour anyway, he should resign and leave as deputy governor if he has honour. But if he decides not to, if opportunities are there, I am sure the party will take a decision on him because he is no longer in our party; he has gone to another party.

“He has been in three parties within a month, wonderful man. From APC to PDP, from PDP to ZLP, he is a wonderful man. So, for me, I have nothing against him but I can tell you, we will be able to live with him if he wants to remain that way. If he stays back in his ZLP, we will live with him. It will soon fly off. The days he is thinking that are long are not long; his days are numbered.”

The governor also added that the result of the election proved that Ondo is not Edo state.

“All of us went to the battle in unity. And it is clear to us that when we are united, no force can move us. APC is a very strong force. We are a strong party in this country. So, we have gone to prove in Ondo that Ondo is not Edo. They were dreaming. Now, they must have woken from their slumber. Ondo is not Edo. We have proven that,” he said.

Godwin Obaseki, governor of Edo, had won the governorship election in the state in September using the slogan “Edo no be Lagos”.