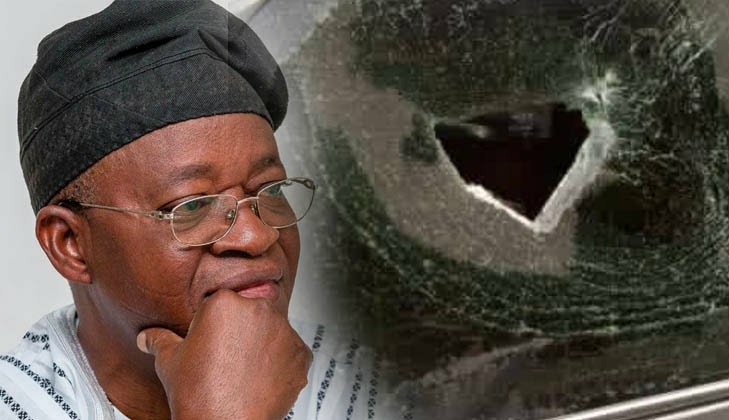 Osun state governor, Oyetola is not alien to pelting of stones. Yesterday stones’ attack was the second one in barely two years of his tenure. The first stone attack was reportedly done by aggrieved party members while the second stone was reportedly done by aggrieved citizens and hoodlums. Life is essential and nobody really deserves to be stoned in such crude manner. I hereby condemn in strong terms the actions of the stone attackers and hoodlums.

To survive two stones attack is no joke at all. I really feel for the state governor and wish the government will investigate this ugly incident and would not hide the findings under the carpet like the #expiredrice one. This new escape deserves to be celebrated and I have no doubts that the camera pulling aides of the governors who are in charge of funfair would surely storm churches and mosques to celebrate the escape. Consolation is the comfort received by a person after a loss or disappointment. Yes, nobody needs it better than the ‘quiet’ governor of the noble state and I trust his aides who are well experienced in that aspect.

In the state of virtue, both the elite and masses do not console themselves. Both have no compassion, pity or sympathy for their plights. When the vulnerable, aged and disable people of the state were given two tins of expired rice during the COVID-19 lockdown, Governor Oyetola vowed to investigate the ugly incident but till date, he has not deemed it fit to address the people. This is the kind of system we run in the state, the system that does not care about justice, event or learn from situations. When you feel cheated as a citizen or you’re pelted stones as an elite, mourn in peace. That is the new design of justice in the state.

Having severally warned the state government to pay attention to the unusual and continuous rise of thugs both in number and capacity within the state, I have no consolation message to the elite class for being casualties of their irresponsibilities. They see every voice in as much it’s not an halleluyah one as enemy of the state. They ignored my warnings and these groups of violent persons became larger in number and strength. There are even rumours in town that there’s a particular political thugs caucus under the leadership of a known thug who works directly with the state government.

You can not separate thugs from Osogbo and major towns in the state. These thugs are empowered by politicians across parties during election and most politicians do not disarm these thugs after polls, leaving them to be pain in the asses of the common people. I doubt if there’s any junction in Osogbo where you will not find thugs. They harass people and forcefully collect monies from them. You can not drive a big car or build a house in Osogbo without being harassed. This I have alerted and continuously raised the alarm that we are sitting on a ticking time bomb if the government refuses to address these germane societal issues.

Instead of the government to look into these issues, they focused more on wastage; distribution of food items to tackle poverty and organising of funfairs rather than creating wealth and empowering youths. They invest in billboards and banners. They have forgotten that the sons and daughters of the poor you refuse to train will not allow you and your children to live peacefully. No sane protester would dare attack a fully armed governor’s convoy; the thugs only took the privilege of a visible crack and some protesters used the opportunity to rudely display their grievances as seen in viral videos.

Two weeks ago when I wrote a piece titled ‘Oyetola and his group of wasters’ following the funfairs organised by camera pulling aides in his cabinet, an apologist of the ruling party who doubles as a ‘come and raid’ ferociously attacked me after he read my piece on the sad state of Ilesa and how terrific the youths of the town are because I cautioned and advised people he refers to as ‘gods’.

This apologist who is either younger or little older than Oyetola’s son who schooled in abroad and does not have to labor to eat, dine and wine allowed political interests and crumbs to becloud his senses that security, safety, welfare and development of the people and the state require no politics. Now that these thugs have extended their wrath to the elite class, can we all both apologists, asslickers, critics and true citizens now call on the government to do something about the growing rate of thugs in the state?

As we condemn the stone attack on the governor, we must also take lessons from the attack. I do not want bore you with the narrative of the incident because for every story, there are two sides; the truth and lie but the undisputed fact is the state governor was pelted with stones.

Some quarters said it was a reprisal attack due to double attacks protesters allegedly suffered from political thugs while some opined that the protest was hijacked by hoodlums. Some quarters alleged that the hoodlums who looted and destroyed Osun mall were arranged to defame the personalities of the #EndSARS protesters in the state. Either of the three, the fact is Governor Gboyega Oyetola has been pelted with stones for the second time and I thank God for saving his life.