On Monday, October 19, a South African man identified as Keatlhotse Mothowakae was sentenced to 70 years behind bars for raping his ex-girlfriend.

25 year-old Keatlhotse Mothowakae, was convicted for raping his ex-girlfriend in 2015 and 2016. He was sentenced in the Mothibistad Regional Court in Kimberley, Northern Cape.

On the day of the rape incident the victim was walking from church to home, when she was accosted by Mothowakae.

During the court proceedings it emerged that Keatlhotse Mothowakae was sitting under the tree from where he grabbed his ex-girlfriend as she was passing by. He dragged her to his residence, threatening to kill her with a pair of scissors and raped her.

The victim managed to break-loose in the morning and alerted the police about the gruesome ordeal she endured at Keatlhotse’s residence. During the rape Keatlhotse took the victim’s cellphone, which he refused to hand back.

He also applauded the National Prosecuting Authority and Department of Justice for removing the rapist for life from the society.

Keatlhotse was sentenced as follows;

The Mothibistad Regional Court had ordered that the sentences should run con- currently. The convict’s name will be registered in the National Register for Sex Offenders. He was also declared unfit to possess a firearm. 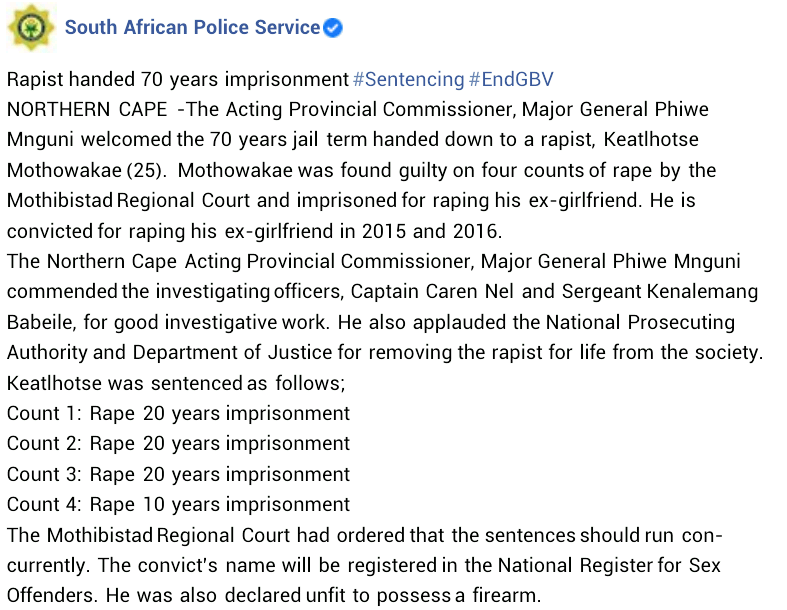 Not possible for hoodlums or unarmed protesters to break into Edo prison, says Journalist Soyombo

Photos: Korede Bello gets a surprise birthday party by his NIJ classmates