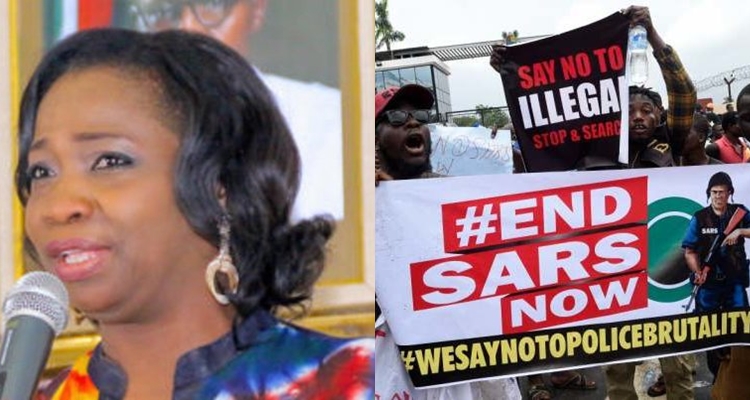 Following the arrest of Nigerians in Egypt for staging an #EndSARS protest in front of the Nigerian High Commission office in Cairo on Sunday October 18, Abike Dabiri-Erewa has reacted.

Shortly after their arrest, actress Toyin Abraham, via her Twitter handle, called on Abike Dabiri-Erewa who is the chairman of the Nigerians in Diaspora Commission, to comment on the arrest of the protesting Nigerians.

Reacting via her Twitter handle, Dabiri-Erewa said the Nigerian Mission is working to effect the release of the arrested Nigerians. According to her, gatherings without permission are banned in Egypt. She clarified that it wasn’t the Nigerian commission that called in the police on the protesters.

”Nigerian mission did not call Police. In Cairo, gatherings without permits are banned. In Egypt you can’t even travel from one part of the country without a permit to travel from the state you live . They have their own rules which they strictly enforce.

The Egyptian police dispersed them, then traced them to a very far place. They didn’t arrest them at the mission. They came in a bus driven by an Egyptian. The driver has also been arrested. The mission will do all they can. Egypt is very very strict with their laws.”