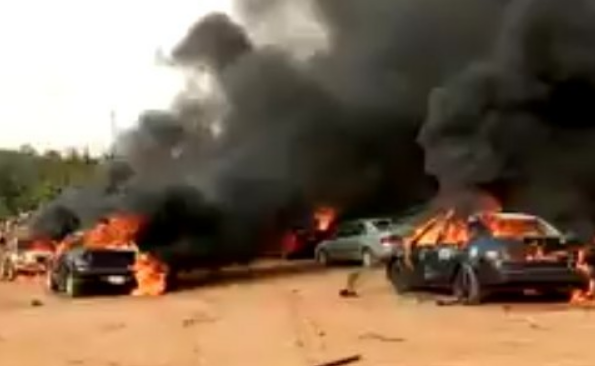 Today’s #EndSARS protest took a different turn as protesters, security operatives and hoodlum clashed in most cities including the FCT.

According to a report TheCable, some suspected hoodlums attacked some #EndSARS protesters in Abuja, burning down their cars.

We learnt that the incident happened around Kabusa junction in the Apo district area of the nation’s capital, at 6pm.

The protesters had converged on Dan Kogi, a junction close to a Shoprite mall. They blocked the road and wielded their placards.

Their attackers swooped on them from different directions while many of them scuttled to safety.

The attack created tension as traders in the market close to the scene locked up their shops earlier than usual. Watch below:

Abuja protesters have come under attacks, both from security operatives and suspected hoodlums.

The latest attack comes 24 hours after the death of Anthony Onome, an Abuja resident who was stabbed while marching with other protesters on Saturday.

Onome died at the National Hospital, Abuja, where he was taken to after the incident in the Kubwa area of the nation’s capital.