The father of Big Brother Naija season 5 ex housemate, Kiddwaya. has advised Nigerian youth to leave the streets and stop the #EndSars protest.

According to Terry Waya, although he is in support of the protest  to #EndSars and all forms of brutality and oppression, he thinks the protesters should leave the streets so that peace can reign.

Taking to his Instastory to pass his message, the billionaire wrote;

“My fellow protesters and supporters am fully with you in this battle to end not only SARS but all forms of brutality and oppression whether military or government, we have made our feelings and case known, we have spoken with one voice but let us allow peace to reign by leaving the streets and allow the government to implement what they have promised to do, God bless all of us ” 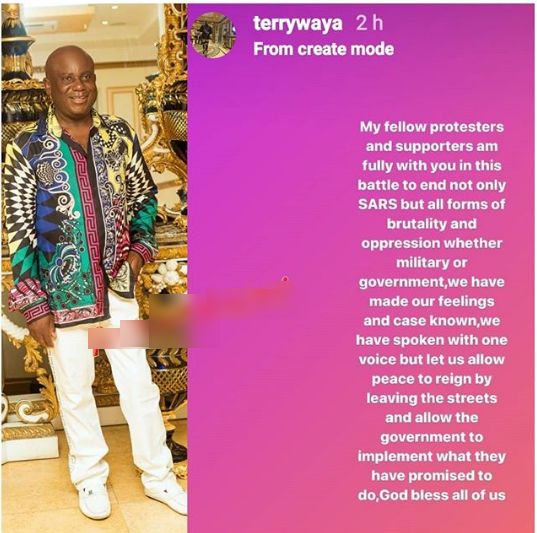 See how Nigerians are reacting to this;

kimorairawo wrote “Oga carry your loot and enjoy it in peace.. don’t let remember you and your role during Abacha. Just go and be buying more Versace shirts”

certifiedboss_1 wrote “This one that started accumulating wealth through the backdoor from government right from Abacha’s regime is trying to act like he’s on the side of the masses. Better sit properly.”