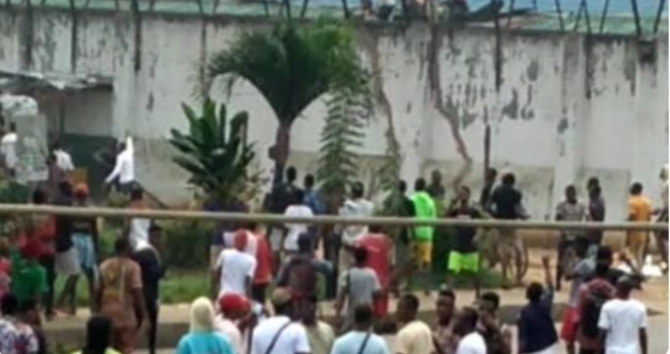 The Nigerian Correctional Service (NCC) on Monday announced that investigation has commenced into the jailbreak in Benin and Oko prisons in Edo state by suspected hoodlums.

Recall that the suspected hoodlums broke into the prisons on Monday during the EndSARS protest in the state.

It was also reported that tens of prisoners were freed from their cells.

Reacting to the incidents, the spokesperson of the service, Austin Njoku said efforts were ongoing to determine the exact number of prisoners who escaped.

He added that the figure of casualties has also not been confirmed.

Njoku further stated that custodial centres were attacked this morning by suspected protesters under the #EndSARS protests in Benin and Oko in Benin.

According to the spokesperson, efforts are underway to arrest the situation and return normalcy back to the centres. The armed squad personnel of the service are working tirelessly to bring the situation under control.

He also condemned the attackers for “their non-peaceful, and violent destructive actions”.

Recall that protesters have taken to the streets to demand an end to police brutality in Nigeria for close to two weeks.

Reports revealed that hoodlums have hijacked the protests in some states and this has led to crisis resulting into deaths while several other persons have sustained injuries in some states.