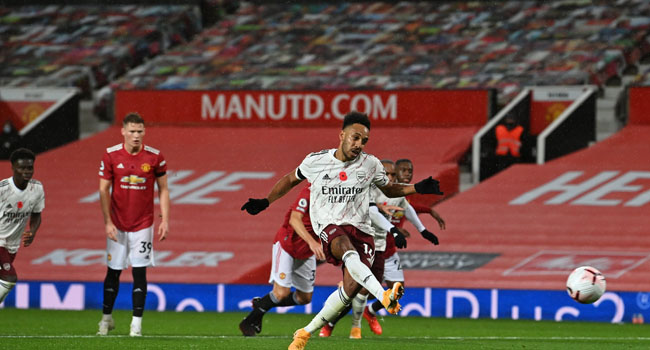 A Pierre-Emerick Aubameyang penalty earned Arsenal their Premier League win at Manchester United in 14 years with a 1-0 result on Sunday.

Paul Pogba brought down Hector Bellerin in the box during the second half and Aubameyang scored the penalty.

United have failed to win any of the first four matches at Old Trafford in the league as manager Ole Gunnar Solskjaer lost his 100th game in charge.

Arsenal were by far the better team in the first half and almost took the lead after 39 minutes when Willian’s curling shot hit the post.

An unmarked Bukayo Saka had a great chance to put the visitors ahead on the stroke of half-time but his header went over the bar.

After 69 minutes, Pogba didn’t track Bellerin’s run and brought down the defender in the box. Arsenal were awarded the penalty and Aubameyang converted from the spot.

United almost equalised late on after Donny Van de Beek’s cross was deflected off the post. The visitors came away with a much deserved victory.

With the defeat, United have gone six matches in the league without a win, leaving them 15th in the table.