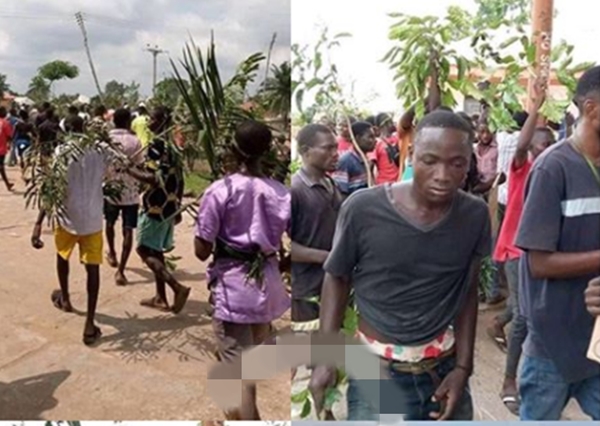 Benue youth protest the incessant disappearance of their manhood

Some angry youths on Saturday morning took to the Daudu major road in Benue State to protest the strange disappearance of the penises of some men in the community.

The youths claimed the incident had been a recurrent phenomenon in the community in the last few weeks. No fewer than six young men have had their penis disappear mysteriously in the past few weeks, a development which prompted the protest.

The youths had to resort to protest after their traditional ruler did not pay attention to their plight.

In other news, Ebonyi state commissioner of police, Philip Maku narrated how suspected hoodlums brutally murdered a police inspector, Egu Omini and cut off his manhood.

Recall that hoodlums on Monday, October 26, attacked and burnt down the Central Police Station in Abakaliki.

Cars, tricycles and motorcycles parked in the compound of the station were reportedly destroyed and set ablazed by the irate mob.

This was contained in a statement issued by the Police Public Relations Officer in the state, Loveth Odah on Thursday, October 29.

According to the commissioner, the hoodlums regrouped in their large numbers on Monday and reinvaded the Central Police Station, Abakaliki, for the second time, setting the station ablaze including police patrol vehicles. Read more here.