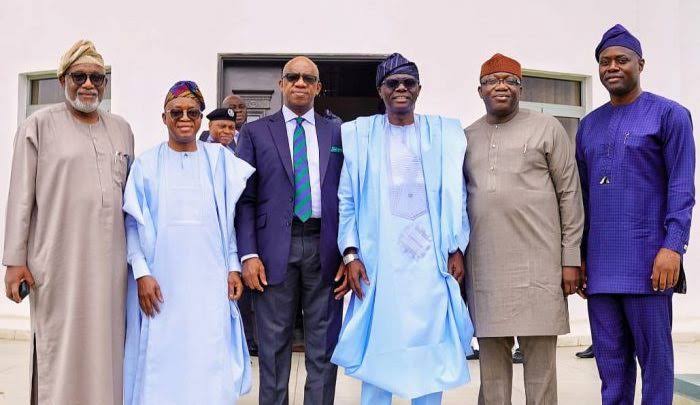 South-West governors, ministers and traditional rulers from the zone led by the Ooni of Ife, Oba Eniitan Ogunwusi, today held a closed-door meeting in Lagos, with the Chief of Staff (CoS) to the president, Prof Ibrahim Gambari, over aftermath of the #EndSARS protests that rocked the region, insecurity and to chart a new developmental agenda for the region.

The crucial parley, which is holding at the State House, Alausa, Ikeja, had in attendance governors of Ondo, Lagos, Oyo, Ekiti, Osun and Ogun.

In his opening address, CoS to the President, Prof Gambari said the president was aware of the level of destruction in the South-West in the aftermath of the EndSARS protest, and the reason he encouraged that the dialogue should hold to chart the way forward.

According to him, it is from the engagement that report would be made available to Mr President for implementation.

Gambari, while also acknowledging that youths in the country had been neglected for long, also admitted that the Federal Government recognised the need to reform the Nigeria Police, adding that the intervention to addressing the country’s numerous problems would be multidimensional.

Chairman South-West Forum, Governor Rotimi Akeredolu of Ondo, who said the meeting was called to have a very important relationship with stakeholders within the region, lamented the level of destruction in the region aftermath #EndSARS protests, describing it as worrisome.

He said the properties destroyed during the period as shown in the video clips by the Lagos State governor, Mr Babajide Sanwo-Olu, were “part of our heritage,” saying everybody was concerned.