“Nobody Wins When The Family Feuds”- Yung6ix Calls On Davido, Burna Boy To End ‘Beef’

Onome Onokohwomo, a Nigerian rapper aka Yung6ix has called on music stars; Davido and Burna Boy to settle any rift between themselves over fear that it could escalate.

The singers are said to have been at loggerheads for some time and it remains unclear what led to their beef.

WITHIN NIGERIA had earlier reported that Burna Boy stylishly mocked David on A Better Time album by referring to it as ‘floppy disk’.

Reacting on Twitter, the Nigerian hip hop recording artist urged them to end their beef over fear the people around them could take the clash to the ‘next level’

According to the rapper, nobody wins when the family feuds.

“David and Burna gotta end that beef cux the peeps around em are so loyal they can take it to the next level. On God u know n—gas ready to let that 400 sing for you, let’s not take it to that level cux all it takes is one wrong scene. Nobody wins when the family feuds. ” 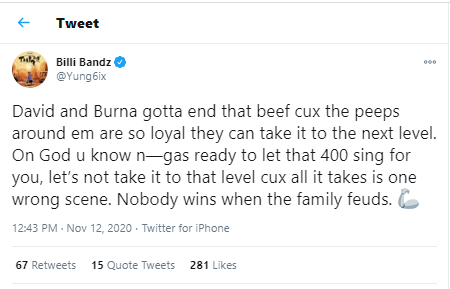