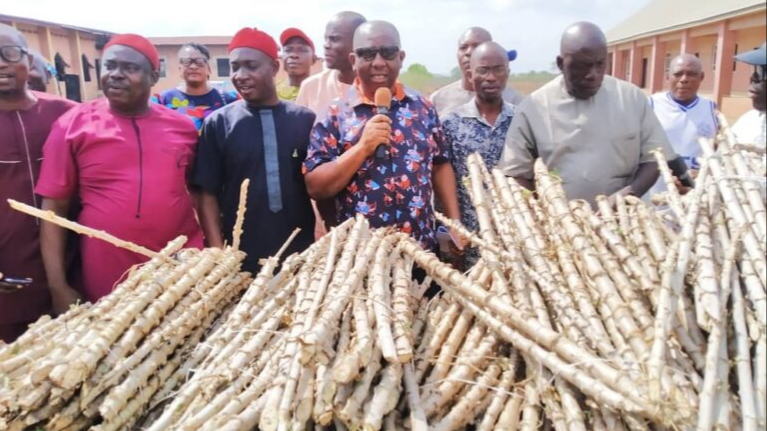 Lawmaker representing Anambra west in the state house of assembly, Patrick Obalim-Udoba has distributed bundles of “high-yield” cassava stems to the people of his constituency.

It was learnt that the distribution of cassava stems was held at Umueze Anam and was witnessed by residents of communities that make up the local government area.

According to the state lawmaker, cassava stem will help the communities to mitigate the negative effect of the flood and allow them to kick-start farming in earnest.

Obalim-Udoba said flood destroyed all the cassava stems stored by his people who are predominantly farmers.

Obalim-Udoba said this prompted him to distribute the high yield stems which will germinate soon.

He advised the farmers to use the cassava stems judiciously.

This is not the first time he would distribute cassava stems to his constituency.

Recall that the lawmaker in 2019 distributed two truckloads of cassava stems to his constituents.

At the presentation, he had said the gesture was to reduce the stress of the farmers going to nearby communities in search of cassava stems after flood disasters and had promised to make it an annual event.

Obalim-Udoba’s gesture comes after Murtala Gwarmai, senior special assistant on youth development to Abdullahi Ganduje, governor of Kano, “empowered” some youth in the state with donkeys.

Gwarmai had reportedly said the beneficiaries requested the donkeys to aid them in transporting sand, gravel, and blocks so as to boost their business.