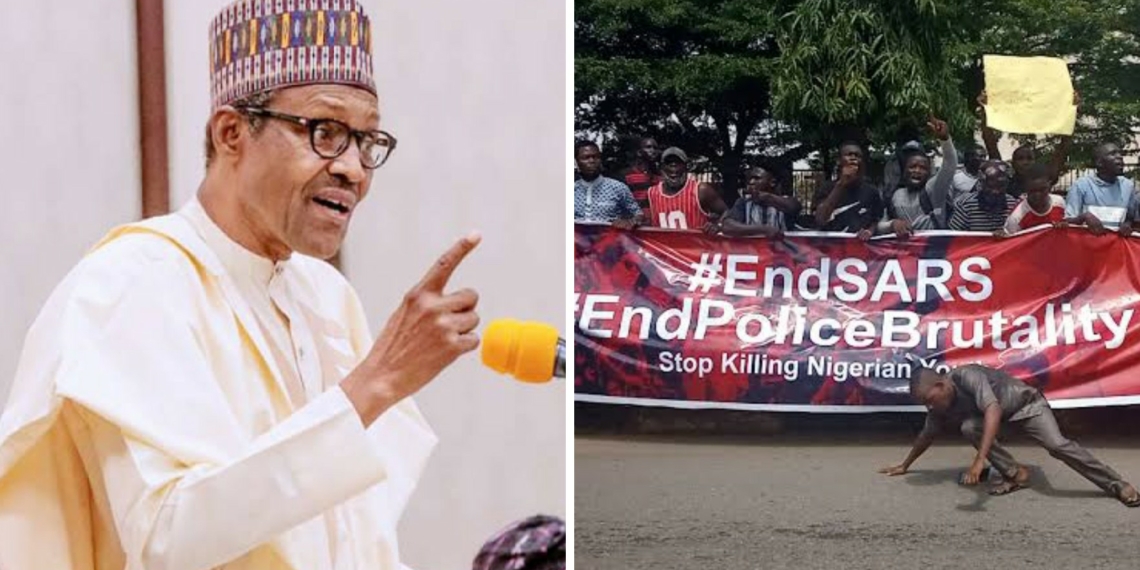 President Muhammadu Buhari on Tuesday told the quarterly meeting of the National Security Council (NSC) that he will not allow a repeat of the #EndSARS protests that resulted to killings and the destruction of properties in the country recently.

The Minister of Police Affairs, Muhammad Dingyadi, disclosed this while briefing correspondents at the end of the meeting presided over by the president at the presidential villa, Abuja.

He explained that in vowing to do everything within his power to prevent a reoccurrence of the #EndSARS protests, the president assured that he will carry all stakeholders, including the youth along in the process of maintaining peace in the country.

Asked whether it would include a crackdown on potential protesters, the minister replied: “On the issue of #EndSARS protests that you have raised, what we are saying is that the government will continue to dialogue, it will continue to listen and will continue to carry all stakeholders along in ensuring that there is no repeat of what happened that destroyed a lot of properties, public and private, individuals in this country.”

The minister said the council reviewed the security situation of the country and noted with concern the increasing rate of armed banditry particularly in the north-west and northeastern parts.

He stated that the council, therefore, resolved to be proactive and to take decisive actions to bring the situation under control.

The minister added that the meeting stressed the need to pay more attention to the police by supplying them with modern equipment to enable them to discharge their functions.

According to hin “The meeting noted with concern the increasing cases of armed banditry particularly in the north-west and northeastern part of the country. The meeting agreed to be more proactive in dealing with the situation in a more decisive manner.

“The meeting noted the need to pay greater attention to the police in the discharge of its functions to maintain peace in the country, in the areas of equipment and modern technology.

“The meeting thanked the president for the concern which he has shown in repositioning the police to perform more effectively.

“In his concluding remarks, Mr President thanked members for the efforts they are making in maintains peace and assured members that he will do whatever it takes to support security agencies in providing peace in the country.

“Mr President assured Nigerians that he will do whatever it takes to ensure the repeat of #EndSARS protests does not occur in Nigeria again.

“Mr President reassured that all stakeholders will be involved in the Process of maintaining peace in the country, particularly the youth, community leaders, traditional rulers, politicians, public servants, religious leaders etc.

“The Federal Government will continue to maintain its bureaucratic, humane and just postures in handling security matters in the country.”

On what are the decisive actions the council planned to take and whether there were timelines for them, the minister said “Let me say that in whatever one does, you must have a timeline, you must have your targets and you must work towards achieving those targets. We have our timelines, we have our targets and we are working towards achieving those targets.”

“Decisive action means, it’s an all-inclusive action that is going to be taken to ensure that in terms of technology, the equipment we can face these challenges head-on,” Dingyadi disclosed.