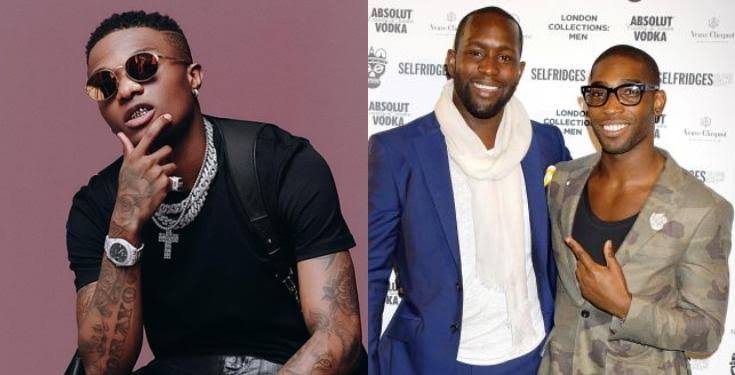 Wizkid took to his Snapchat page to publish a set of threatening messages at Dumi Oburota and British rapper, Tinie Tempah. He also made claims that both of them were gay.

WITHIN NIGERIA recalls that Wizkid signed a management deal with Disturbing London, a UK based platform in 2012. But six years down the line, all seemed to be going pear-shaped. A deal built on trust and African brotherhood seems to be up in the air.

Taking to social media Thursday, Wizkid wrote, “Looking for these two criminals, Tinie and Dumi… And I know y’all still f*cking each other! with your dick sucking lips!!! I go catch una!! On sight for you p**** ni****! P**** boy, I’m coming for you!”

Wizkid also took to his Twitter page to tweet at Tinie Tempah. He wrote, “@tinie yo p**** boy! pray I don’t catch you and Dumi!!!”

Tinie Tempah was born Patrick Okogwu to a British mother and a Nigerian father. In 2010, he released the classic album, Disc-Overy. Three of its biggest songs charted within the top three of the UK top 40 – two of which were No. 1 singles. One of those No. 1 singles also peaked at No. 12 on the US Billboard Hot 100.

After Wizkid signed a record deal with RCA Records, he hinted at a change of management in a tweet. Then on Saturday, June 23, 2018, he dragged Disturbing London.

He wrote, “Don’t do business with Disturbing London kidsssss…. Criminal operation.” Then on August 15 of the same year, he tweeted that, “Sh*t will get done with or without u…”

Shit will get done with or without u⚡️⚡️💯💯

A fan then replied that, “Niqq* talking about Disturbing London I know that…”