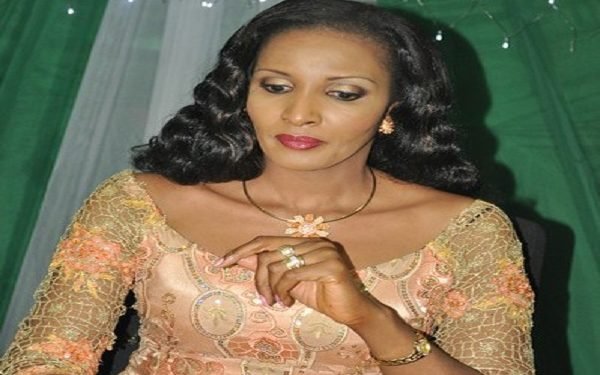 Wife of former Biafran Leader and former Nigerian ambassador to Spain, Mrs. Bianca Ojukwu has slammed Igbo leaders for keeping silent on the alleged continuous marginalisation of the people of South East by the federal government.

The former Nigerian ambassador to Spain, Bianca also blasted the All Progressive Grand Alliance (APGA) and her leadership over lack of interest in posthumous honour to her husband.

This statement was made by Bianca during the ninth edition of Dim Chukwuemeka Ojukwu memorial ceremony held at Ojukwu Centre Owerri, the Imo State capital.

Recall that Ojukwu died in 2011 in London, but nine years down the line, the members of Movement for the Sovereign State of Biafra and Biafra Independence Movement founded by Chief Ralph Uwazuruike have consistently organised memorial ceremony for the late Biafra leader.

Ojukwu’s widow, accused Igbo leaders of not talking for their people but being, “in a rat race to be included in the center”, thus leaving the issues affecting the generality of their people.

She stressed the need for Nigeria government to treat Ndigbo fairly in the distribution of the nation’s resources, stating that Ndigbo had been roundly marginalized in the country.

She stated that with the current trend of events in the country, there might not be an end in sight for the continued agitations for an independent state of Biafra.

Umahi: Everybody in South-East wants to belong to the APC

“The federal government must review its stand towards the people of South East. The south east is marginalized in every sector. Igboland is now a metaphor for wasted youths in Nigeria. That’s a very precarious situation for this country.

“Inability of government to share political and economic opportunities equitably is what is causing tension and problems in the country.

“For as long as there’s injustice and inequity, there must be agitations and Biafra will never die.

“Despite this obvious reality, I advise the Igbo to continue toe the path of peace in your quest for agitating for your due rights and privileges in the Nigeria state,” she said.

She also regretted that no member of APGA-led Anambra State Government attended the event.

“I want to know if any representative of Anambra State Government or APGA founded by Dim Chukwuemeka Ojukwu is here for this event?

“It is very clear that neither Anambra government nor APGA sent a representative here today and this has been their attitude in spite of the fact that they use picture of Ojukwu as mascot during political campaigns,” she said.

According to her, APGA controlled Anambra for 16 years and people like former Governor Peter Obi, incumbent Governor Willie Obiano all used Ojukwu’s name to achieve political fame, yet they no longer look the way of their ex-political leader.

Bianca, who praised Uwazuruike for his sincere commitment towards remembering the ideals of her late husband, said the spirit of Ojukwu would continue to guide his path.

Bianca used the medium to call on Igbo people with investments in the Diaspora and other big cities to think home, saying it was because of massive investments outside that some Igbo people do not see reason for Biafra agitation.

Prof. Protus Uzoma, a guest speaker at the event said though Ojukwu was dead, his memories would live forever in the minds of Igbo people.

Uzoma, a lecturer in the philosophy department, University of Uyo, said Igbo people are blessed with abundant human and material resources.

“If our people have the needed Independence, we will be in the space within five years,” he said.