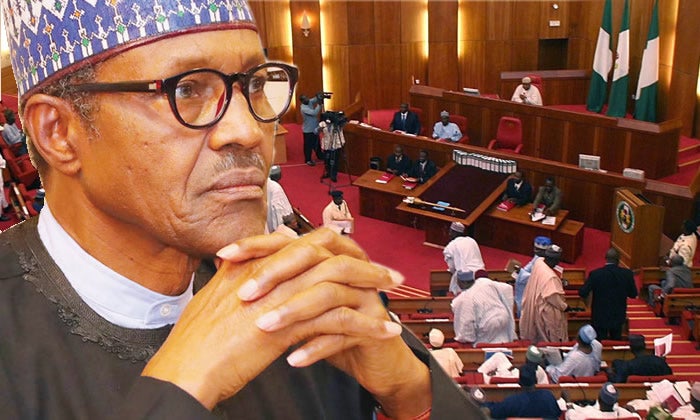 The NDF said any attempt to overturn the mandate of Nigerians will be met with stern resistance.

The group made its position known in a statement signed by its Secretary-General, Dr Bolaji Abdulkadir on Tuesday.

Recall that President Buhari had last week met with the Speaker of the House of Representatives, Femi Gbajabiamila, and other principal officers of the House and agreed to address the lawmakers on the country’s security challenges on Thursday.

But a member of the House of Representatives, Kingsley Chinda, on behalf of the Peoples Democratic Party caucus, called for the impeachment of the president.

Despite distancing itself from the lawmaker, the NDF warned the House leadership to call the PDP to order against inciting a section of the population to revolt and cause a breakdown of law and order.

Dr Abdulkadir noted that the country is already reeling from security breaches that have PDP discontent written all over it and now coming up with the impeachment bid will only further inflame the situation.

According to the group, the “power-thirsty” PDP has continued to work with other opposition elements and commercial activists to force a change in the country’s leadership.

The NDF, therefore, urged that the NASS to curtail the activities of its PDP caucus as “Nigerians will hold the legislature responsible should anything happen to threaten our democracy”.

As a show of our zero tolerance for unpatriotic elements, NDF, however, called on the constituencies of the “rogue” reps members to immediately begin their recall process for pursuing sectional political interests.

The National Democratic Front (NDF) is alarmed at the misguided calls for the impeachment of President Muhammadu Buhari particularly as demonstrated by the People’s Democratic Party (PDP) caucus in the House of Representatives and the opposition’s propaganda machine.  NDF has resolved that Nigerians will hold the National Assembly liable should anything happen to the nation’s democracy.

Such calls and attempt to illegally sack President Buhari’s government can only be contemplated by anti-democratic forces and those who do not wish Nigeria well. It is most unfortunate that they are hiding behind the façade of being democrats when in reality they abhor the very tenets of democracy, which is why they are keen on using crude tactics to overturn the mandate that Nigerians gave the government.

NDF is worried that the PDP caucus is exploiting its position as a vocal minority to incite a section of the population to revolt and cause a breakdown of law and order so that they will then use this as a basis to accuse the President of being autocratic. The country is already reeling from security breaches that have PDP discontent written all over it, coming up with the impeachment bid will only further inflame the situation.

The thugs that the PDP once used to snatch ballot boxes, manipulate elections and intimidate political opponents have graduated to becoming the bandits, kidnappers and robbers that the House of Representatives caucus is today complaining about. Rather than grandstanding and maligning President Buhari who is doing good work despite being constantly sabotaged by the opposition, the PDP caucus members should be brave to own up to how they created the terror machine that is now tormenting Nigerians. This would at least offer meaningful insight into dismantling it.

It is disheartening that these House of Representatives Members claimed to represent millions of youths from nooks and crannies of Nigeria, but in reality, they have made it their mission to cause division and disunity among citizens. They hired themselves out as mercenaries to the opposition to threaten Nigeria’s democracy and causing strife by hijacking what was meant to be peaceful protests held across the country.

NDF is stating this because it is now obvious that the #EndSARS protests, the degenerating state of security, the coup plot being packaged as impeachment attempt and the desperation to emasculate the military are all the grand plan of the PDP and certain elements that are out to destabilize Nigeria.

We remind Nigerians that in the runup to the 2019 General Elections NDF had severally raised the alarm about PDP’s plot to wreck Nigeria by precipitating crises that will result in the formation of an interim government populated by its members after it would have illegally ousted the President Buhari out of office. Sadly, every single scenario that NDF anticipated in those warnings is now playing out.

PDP working with other opposition elements and commercial activists has continued to attempt forcing a change in the leadership of the military, its killers are running riot across the country under different names – bandits, kidnappers, terrorists and other, it has hijacked a citizens’ movement for unleashing destructive protests in several cities of the country and it is now attempting a full-blown coup plot under the guise of an impeachment demanded by its caucus in the National Assembly.

PDF categorically demands that the National Assembly should curtail the activities of its PDP caucus as Nigerians will hold the legislature responsible should anything happen to threaten our democracy. The National Assembly has no business tolerating the excesses of people that have clearly outed themselves as enemies of the State.

As a show of our zero tolerance for unpatriotic elements, NDF is calling on the constituencies of the rogue House of Representative Members to immediately begin the process for the recall of their errant representatives, who have continued to pursue sectional political interests as part of a PDP caucus instead of providing wholesome representation to the people they represent at the National Assembly. These members must also be booted out parliament because they monetized their roles by receiving payment in hard currency to overthrow the government, an action that jeopardizes national security.