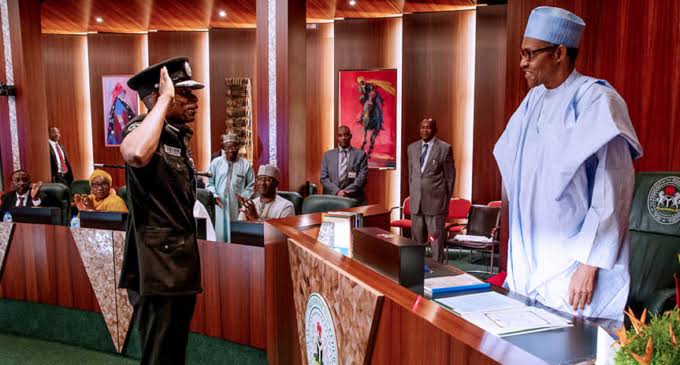 President Muhammadu Buhari on Tuesday assured officers and men of the Nigerian Police that the Federal Government was fully committed to improving their welfare.

The President gave the assurance on Tuesday while virtually commissioning the new Head Office Building of Nigerian Police Fund Pensions Limited in Abuja.

According to a statement issued by his Special Adviser on Media and Publicity, Mr Femi Adesina, President Buhari said the government was also focused on ensuring that police officers, who served the nation meritoriously, were resettled into retirement, with some financial support.

“To the Nigeria Police Fund Pensions Limited, I wish to applaud your Company for instituting a Retirees Resettlement Support Scheme through which you provide some form of financial support to retired Police Officers to enable them to resettle fully in retirement after meritoriously serving the nation.

“Taking your services to the doorstep of Police Officers by maintaining an office in each Police Command and Formation is also very laudable. At this juncture, I urge you to continue your untiring efforts in collaborating with the Police authorities towards improving the welfare of both serving and retired personnel of the Nigeria Police Force.’’

The President commended “the continuous efforts of the Nigeria Police Force, not only for fighting and addressing the emerging internal security challenges, but also in enhancing the welfare of their personnel through their Pension Fund Administration,’’ assuring of more government support.

“This ceremony is a significant milestone for the nation’s pension industry as this New Head Office Building Complex is the first to be purpose-built by Pension Fund Administrator.

“It is noteworthy that for a company that is just six years old, to have achieved this magnificent, befitting edifice, utilizing only its internally-generated revenue, and using wholly indigenous contractors, shows that our efforts in driving fiscal discipline and encouraging patronage of local firms is yielding the desired results.

“To that effect, I praise the consultant who designed the project as well as the contractors that erected this beautiful complex, whom we learnt are both indigenous, as they work to promote and build our economy through the provision of jobs to our teeming youths. I am delighted to hear that during the construction of this project, over 2,000 man-labour were engaged”, he said.

President Buhari congratulated the Board, Management and entire staff of NPF Pensions Limited for attaining the laudable feat of building a befitting Head Office for the Company.