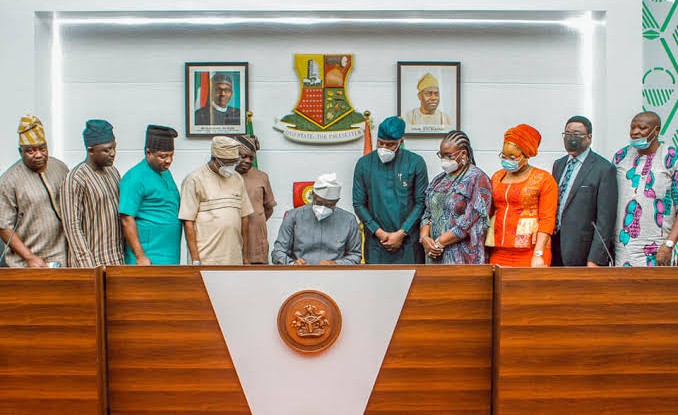 The brief signing ceremony was held at the Executive Council Chamber, Agodi-Secretariat, Ibadan.

Addressing top government functionaries and members of the House of Assembly, who were at the ceremony, Makinde said the 2021 budget would accommodate more developmental projects for the state, with the budget performance set at 70 per cent.

He added that the budget named “Budget of Continued Consolidation” will increase the state’s ability to respond to economic challenges, adding that his administration will do the needful to achieve the fiscal sustainability of the budget.

The governor hailed the lawmakers for the effort put into the process to ensure that it was completed in time.

He denied the alleged report that the budget was ‘padded’ by the lawmakers, noting that they have a right to review it upward.

Recall that the governor had ordered the downward review of the N273.7billion budget earlier approved by the Assembly to N268.8billion due to the need to achieve a favourable budget performance.