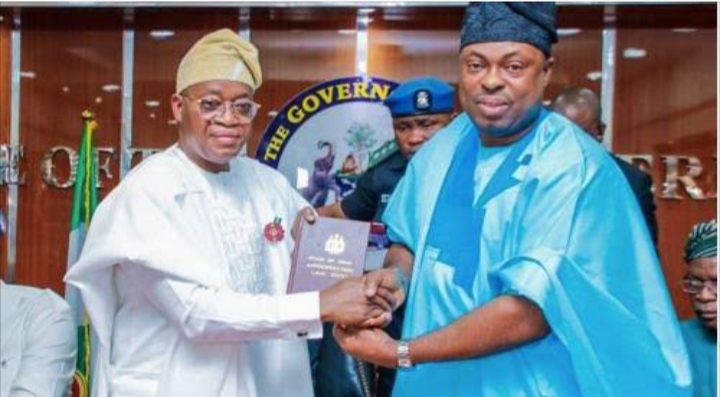 When council chairmen fight with their councillors, they take it to the state assembly for settlement, resolution or possible penalty. Unfortunately, the state assembly which has resolved and issued penalties for warring officials at the local government level is currently battling with leadership crisis which may consume the house if not carefully managed.

Just like his counterpart in Cross Rivers, Governor Adegboyega Oyetola is also nursing an open wound. Yes, there’s a self-inflicted wound in the legislative arm of government in Osun. While Ayade is battling with aggrieved magistrates who are unrelenting in their pursuits to receive their allowances, Oyetola is busy ripening off the native intelligence of the head of legislature, Rt. Hon. Timothy Owoeye and to worsen the situation of the arm of government; the same arm that approves allowances for the executives does not receive and the head of the arm wants members to keep quiet.

Like the crying magistrates in Cross Rivers State who stormed the state secretariat as representatives of the third arm of government in the state to demand for unpaid salaries and allowances, the minority leader of Osun State House of Assembly has also narrated how the head of the legislature, Hon. Timothy Owoeye sidelined the opposition members he represents in the official signing of the budget and how allowances of all members either furniture, constituency or health have not been paid.

Like I earlier posited, there’s truly a self-inflicted wound within the legislative arm in Osun. This wound is not new but they have been managing it without noise until the minority leader of the house broke the camel’s back. The only difference between the Cross Rivers magistrates and Osun lawmakers is the former have not stormed the streets to protest their unpaid allowances because they still believe in political dissolution. Osun is no doubt a state of protest. From the pensioners to teachers to civil servants to students and the lawmakers, all have been about fund and misplaced priority of the incumbent administration.

It is interesting to note that Rt. Hon. Timothy Owoeye is not strange to the workings of the state assembly. I do not think Mr. Speaker needs to read about democracy and sanity of the legislature because he has practically experienced it and benefited grossly from it. Timothy Owoeye has served as a floor member, minority leader, majority leader before he becomes the speaker of the house. But one wonders why the house he leads is in turmoil despite his many years of experience. It is simple; Rt. Hon. Owoeye is a puppet of the governor and did not become the speaker of the house based on merit. When core supporters of Rt. Hon. Timothy Owoeye want to argue or defend why he was ‘cabally-elected’ as the speaker of the house, they only cite experience as factor to be greatly considered. Till today, I still wonder why they did not cite native intelligence, smartness and brilliancy.

Yes, Rt. Hon. Timothy Owoeye has spent donkey years in the state assembly but he does not have the experience. This is clearly shown in his actions and the allegations raised by the minority leader of the house justified my position. In one of my articles titled “Osun Speakership Race: The Dark or White House”, I opined that if Rt. Hon. Timothy Owoeye emerges as the speaker, there will be internal crisis and there won’t be any positive contribution from the legislature to the state. Months after, people who read the piece see me as a seer because Rt. Hon. Owoeye and the house he leads has not done something different.

Osun citizens and lawmakers may dislike Rt. Hon. Timothy Owoeye but Governor Gboyega Oyetola likes him and will continue to be happy with him as the speaker. Nigerian governors do not appreciate speakers they can not control easily. Oyetola appointed Amotekun DG which was clearly against the dictates of the bill Timothy and his colleagues passed yet both were seen the following week with flowing Agbadas and smiling faces. Rt. Hon. Timothy waded into a state institution crisis, initiated and saw to the final passage of the autonomy bill to resolve the crisis but the bill has been on Oyetola’s desk for months with no attention because he has no regard for the legislature especially the man who presides over it. Some lawmakers were reportedly denied entry in a state function and many other instances that ridiculed the legislature. Yes, the legislature is used to ridicule because one can only respect the setting of house of a man you give honor to.

I disagree with opinion moudlers who describe Rt. Hon. Timothy Owoeye as a rubber stamp speaker. They owe the likes of Femi Gbajabiamila, Ahmed Lawan and other Nigerian speakers an apology. To me, Owoeye is something worse. The legislature is a sacred institution and it is a great disrespect and disservice to play politics there. A minority leader of the house was disallowed from attending the official signing of the budget ceremony because he belongs to the opposition and attempts to speak at the plenary by the minority leader and his colleagues were futile because they do not belong to Mr. Speaker’s party. When did Osun state assembly become APC secretariat?

Even if Rt. Hon. Timothy Owoeye is not well read as posited by those who have no regards for his style of politics and representation, at least he once occupied the office of the minority leader and he was not denied his inalienable rights of participation. He was able to grow in the house because he was not choked nor politically stiffed. Is it true that Rt. Hon. Timothy Owoeye is a weakling? Three opposition members against twenty-three members and the head still feel uncomfortable? This is laughable and very interesting. Some quarters say that Rt. Hon. Timothy Owoeye needs to prove his loyalty to the governor because he made him the speaker not representatives of the people and stiffing the opposition in the house is one of the best visible ways to prove his loyalty. The minority leader summoned courage and vented his anger wisely in an interview. The knockout was unexpected, revealing and shocking. I doubt if it met the speaker and his table loyalists well. The press statement issued by the speaker’s press secretary exposed it all.

Barely 12 hours after the minority leader raised the alarm in an interview, the lawmakers loyal to their interest passed a vote of confidence on the leadership of the house under the control of Hon. Timothy Owoeye. The lawmaker of my state constituency who sunk two boreholes and invited the state governor, speaker, royal fathers, top officials of the government and party to the commissioning was also part of them. This same lawmaker once decried paucity of funds especially constituency allowance and even cite it as reason why he has not done any tangible projects or programmes for the people but he changed the gear because of politics and interest. It is simple; to the Osun lawmakers, personal interest is greater than collective interest and in as much they receive their salaries and indirectly receive contracts from the state or join the executives in systemic looting, they are fine even if the people who voted them have no access to the dividends of democracy.

When confidence is threatened or there are doubts, vote of confidence comes into play. There’s no shortcuts to it, Rt. Hon. Timothy Owoeye has lost the grip and sanity of the legislature. Although it is not new but now noisy and there’s an urgent need for him to rescue the canoe he’s paddling because he is also a victim. If I were to be in his shoes, I would ignore the vote of confidence passed by hungry and praise-singing lawmakers, call for a roundtable meeting, address pertinent issues and place the legislature in its rightful position as an arm of government not a puppet of the executives. I would respect the opinions of all lawmakers irrespective of party and affiliations and see the plenary I preside over as an assembly of peoples representatives not a group of protuding bellies party men. Rt. Hon. Timothy Owoeye needs to tidy up and become smarter. Oyetola is winning it all.