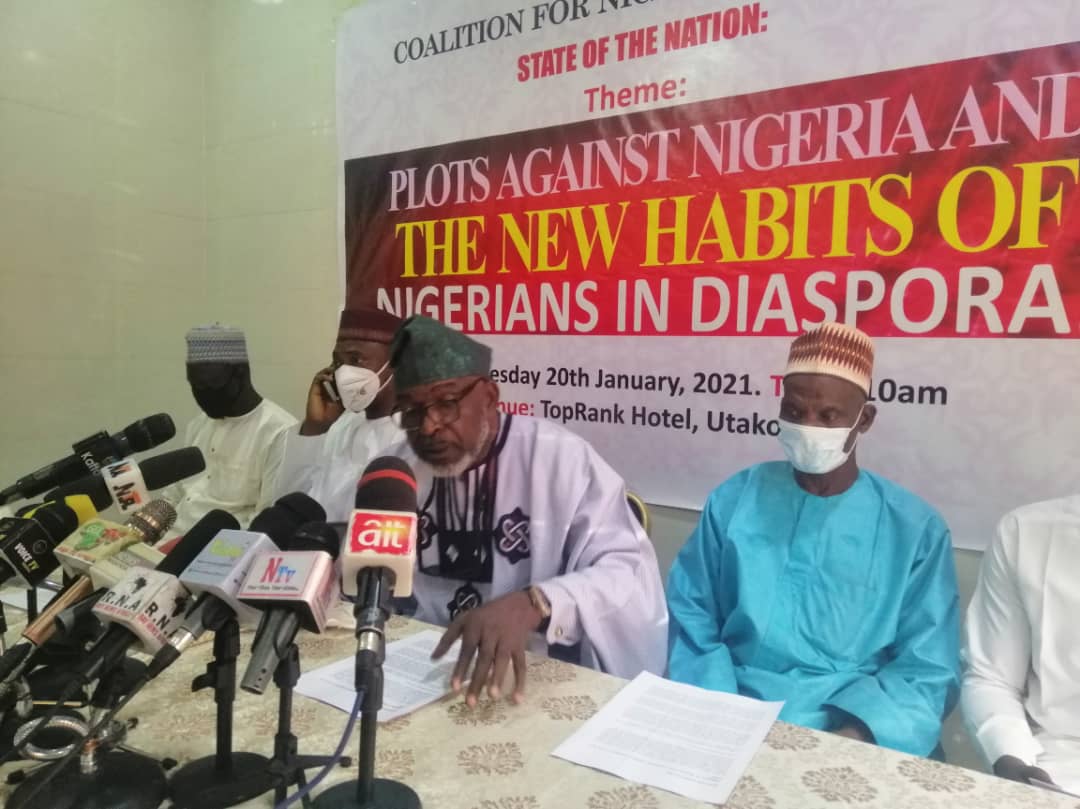 Some Nigerians with questionable character in the Diaspora have indulged in malicious campaigns to radicalize their compatriots and promote destabilization back home.

This revelation was made by the Coalition for Nigeria Movement (CNM) in a press conference on Wednesday in Abuja.

According to the group, these subversive elements intend to tarnish the image of leaders, while ultimately activating insecurity and economic crisis that would lead to anarchy.

In his address, CNM’s leader, Patriot Sabo Odeh said Nigerians must be aware of these elements who deliberately instigate problems back home and escape with their families to safe abodes.

According to Odeh, they sponsor youths to protest under the pretext of democratic liberty and fails to speak out when it turns violent.

The coalition recalled the role played by these Nigerians abroad in fuelling last year’s EndSARS protest which eventually led to arson, unrest and bloodbath.

The group wondered why these Nigerians who criticised the Federal Government for quelling further breakdown of law and order suddenly went mute when police were deployed at U.S. Capitol Hill.

The Coalition for Nigeria Movement, however, advised Nigerians to wake up from slumber, before the antics and sinister plans of these elements in the diaspora would cause the total ruination of our country.

It added that the mindless assault and undermining of the peace and security of our country in the guise of the exercise of democratic rights must cease. 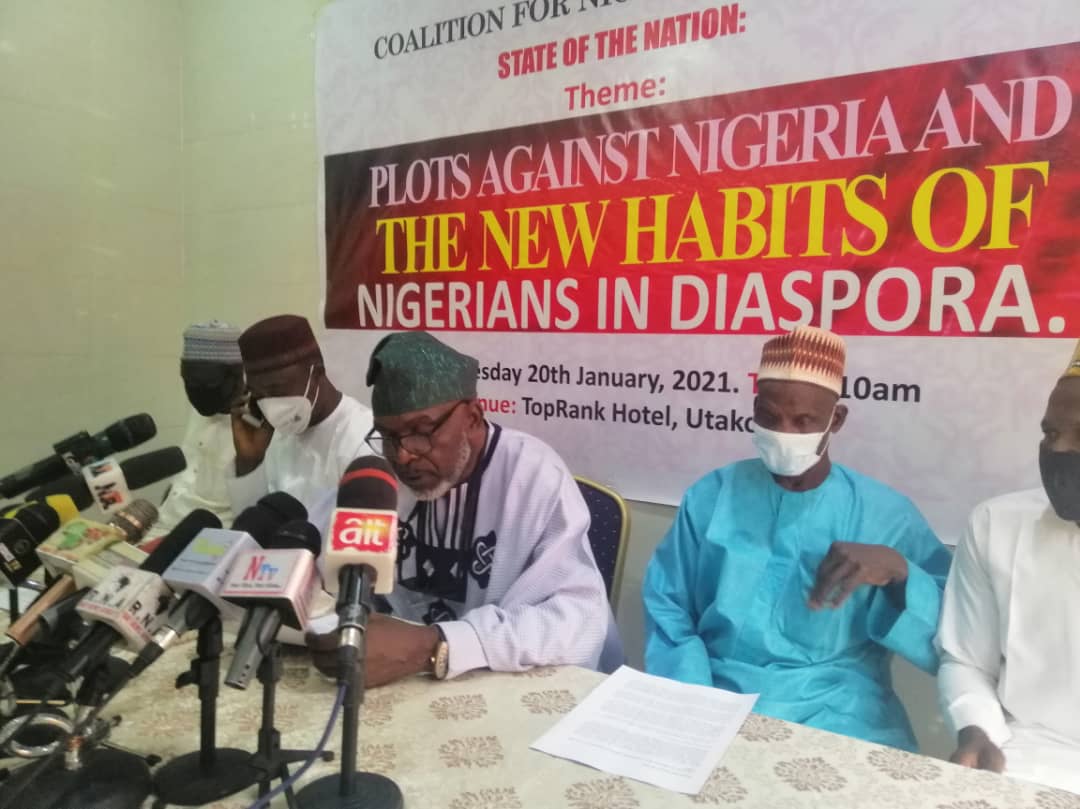 The Coalition for Nigeria Movement (CNM) is wishing you a prosperous and happy New Year, as we welcome you most warmly to this press conference.

We are elbowed to address this press conference to speak to the generality of Nigerians over the trending mindsets and inclinations of Nigerians in the diaspora who have decided dodge the pains, discomforts and scars of nation-building, but indulges in subversive actions against the country. Whilst this clan of Nigerians have decided to hoe themselves in foreign lands, they deliberately instigate problems of frightening dimensions on insecurities, but escape to the safer abodes of other nations with their families when the conflagrations they ignite goes wild aflame.

The troubleshooters abandon the rest of us to our fate, after making us susceptible to the problems they generate by their actions and utterances’. We are baffled at the manner these Nigerians in diaspora dubiously misinterpret and apply the doctrines of freedom of speech and the rights to public protests by the citizens in the expression of grievances against the government in a manner which projects them as blind to the discernment of peace and violence.

This tendency has become too pronounced under the administration of President Muhammadu Buhari in the last four years. These diasporan Nigerians prod and sponsor our youths to protests under the pretext of democratic liberty, but hardly know the difference between peaceful and violent protests as espoused by democratic Governments globally.  Even when such protests become violent and bloody, or marred by destructions the Nigerians in diaspora use various weapons, especially social media platforms to bolster the perpetrators of such evil against the people and the nation to continue in self-destruction.

Whilst we are unexcited at recounting the gores of some of these recently ugly so-called “democratic” public protests in Nigeria, which did only become bloody but violated the basic doctrines of liberty under a civilian government, but it has become pertinent to use the incidents for illustration and clarity.

We are aware of the age-long aberrations’ and the nuisances inherent in members of the outlawed sect, the Islamic Movement in Nigeria (IMN) or the Shiites in Nigeria led by Sheik Ibrahim El-Zakzaky.  The sect’s devious members have repeatedly invaded Abuja with guns and other dangerous weapons under the guise of protesting what they believed in their narrowed senses as the unlawful incarceration of El-Zakzaky.

The protests were organized at two or three separate instances; but quite sadly, the Shiites defiled all sanity, turned violent and brutally engaged security agents drafted to maintain public law and order. In one of the incidents, they crudely attacked and gruesomely murdered Nigerians including a senior police officer.

Let us again look at the violent dimension of the #EndSARS protests of last year. It was executed with the same tenor of the IMN’s protests or other such demonstrations in Nigeria under the Buhari Presidency. All of us can attest to the scary bloodbath, rape of women, cruel butcher of security agents by the protestors, the destruction of public and private properties, looting, acts of arson and vandalization which were committed.

Nigerians were subjected to this level of barbaric violence and brutality in the pretext of “democratic” protests. This is not permissible anywhere and under any system of government in the world. Unfortunately, while the incensed madness lasted, Nigerians in the diaspora shamelessly rather emboldened and encouraged the crisis-printers agents of darkness and the hoodlums.

Strangely, Nigerians in the diaspora were rather faulting the strident measures President Buhari adopted to halt the carnage and restore public peace. The Nigerians in foreign lands lectured us on how undemocratic Mr. President acted by ordering the Military to quell the insane violence. They branded President Buhari a civilian dictator and all manner of derogative sobriquets.

But we must realize that democracy is not practised in Nigeria alone or Nigeria’s brand of democracy emanates from the skies. Almost every nation on earth has embraced this system of government. And with it, the fundamental doctrines of freedom of expression and liberties as also guaranteed in other nations. But there are limitations and the citizen’s exercise of these rights is also guided by the principles of decency and the consciousness of resisting the temptation on encroaching on the rights of other countrymen and women.

But most pointedly, no democratic leader allows national security to be compromised by hoodlums and miscreants in the guise of exercising democratic rights either in public protests or any other endeavour.  National interest supersedes every other consideration. Therefore, democratic protests which assume the character of bloodbath are ruthlessly crushed with the force it deserves.

Nigerians have seen it done elsewhere in recent times. We know America as the global bastion of democracy. But outgoing President Donald J. Trump could not tolerate lawless protestors. He ordered American Military out to protect America’s national heritage from abuse by vandals, looters, arsonists’ and brigands. It happened during the #BlackLivesMatter demonstrations’ over the police murder of George Floyd. No one raised an eyebrow.

And it was recently, we witnessed the episode of the violent invasion of Capitol Hill building by pro-Trump protesters. In a split-second, security agents murdered five Americans.  The venom expressed by the protestors at Capitol Hill was just an insignificant fraction of what Nigerian youths did during the #EndSARS protests in the country. Among victims of the police reaction to the enraged and violent protesters was a woman who was shot point-blank on the chest and she died instantly.

Unbelievably, CNM observed with consternation the conspiratorial silence of Nigerians in the diaspora over the brutal police encounter with protestors at Capitol Hill. None of them neither condemned nor queried the excessive application of force by the American police.  We expected to hear a public condemnatory statement from the Nigerians who administer the Abuja country office of Amnesty International, but no word has been heard from them to this moment. But these are the people who pick bones in everything Buhari.

We must understand the motive and hypocrisy in the malicious campaigns of these Nigerians in the diaspora against their country. The masterminds of the bellicose campaigns are diaspora Nigerians who are at best, outcasts and renegades who escaped or sought asylum in foreign countries after committing criminal acts in Nigeria. Many of them were school dropouts, rapists, lawbreakers, armed robbers, bank robbers, looters of our commonwealth, failed businessmen and lazy baboons.

CNM is therefore calling on all Nigerians to wake up from slumber, before the antics and sinister plans of some Nigerians in the diaspora would cause the total ruination of our country. It appears to us now that what Nigerians who have escaped to foreign lands learn first are the tricks of how to orchestrate the destabilization and destruction of their country. This is condemnable and unacceptable.

This is the time for us to unite to tackle these questionable characters headlong. The Diaspora Office must be revisited.  We suggest that it should be scrapped because it has lost its relevance. Those who congregate under its roof are mere opportunists. They are bringing their disappointments abroad to implant a lawless society in Nigeria that was not accommodative to them before taking a flight abroad. The Diaspora office has failed. It has become an avenue for disgruntled elements to congregate against the interests of the entire country.

The CNM is pleading with all the citizens of our country rise against the negative influence and interferences by Nigerians in the diaspora who mean no good for our beloved country. This is not the time to procrastinate in taking the appropriate action. The mindless assault and undermining of the peace and security of our country in the guise of the exercise of democratic rights must cease.