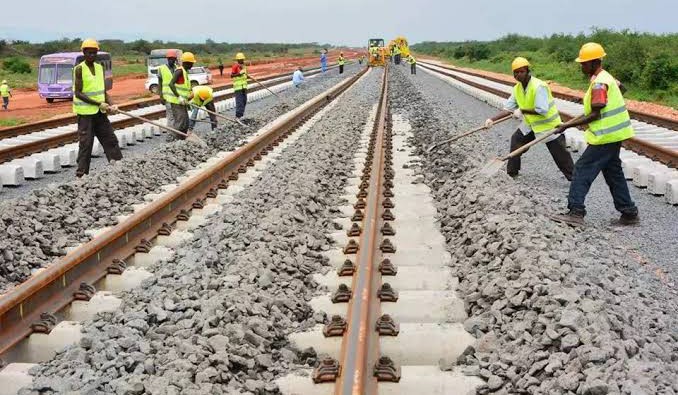 The Nigerian Ports Authority (NPA) has announced the completion of the Lagos-Ibadan rail connection to the Lagos ports in Apapa. The Authority also reiterated its commitments to intermodalism for efficient cargo evacuation.

The NPA made the announcement via its official Twitter handle on Monday. The Port Authority noted that decongesting Apapa remains a key priority of the current management.

“‪We are pleased with the news of the completion of rail connection of the Lagos-Ibadan Rail to the Lagos Port Complex, Apapa.

“The Authority is committed to intermodalism for efficient cargo evacuation. Decongesting Apapa remains a key priority of this Management,” the agency stated on its official Twitter handle.

Recall that construction of the double-track rail line began in 2017. The line runs from the Lagos ports, the country’s biggest population centre and economic hub, to Ibadan, the regional capital of the South West.

A trial service on October 14, conducted with passengers onboard, achieved an end-to-end journey time of 2h 40mins.

However, journey times are expected to be cut to two hours following the inauguration of full services on the line.

The line is intended to reduce traffic on the heavily congested Lagos–Ibadan highway, which is currently the main link between the two cities. The Apapa port connection is also expected to take the pressure off the roads and address the perennial Apapa traffic snarl.

The project was funded primarily through a N408bn loan approved by the Export-Import Bank of China (Exim Bank) in January, alongside counterpart funding worth N72bn provided by the Nigerian government.

The line is part of a planned $US 11.1bn, 2733km Lagos–Kano standard-gauge north-south railway. The first 186.5km section of the project, between Abuja and Kaduna, opened in July 2016. CCECC is constructing the line under a $US8.3bn contract awarded in 2006.